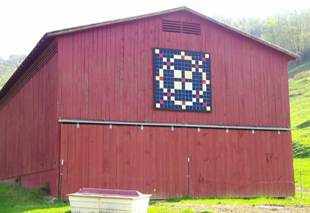 Barns are a common sight when driving through the mountain roads of western North Carolina. During the past ten years residents there have started adorning their barns with painted murals designed to look like quilt patterns. These murals are made by Quilt Trails of Western North Carolina, a non-profit corporation based in Burnsville, North Carolina which has created more than two hundred quilt squares in over seven counties. Quilt Trails is a collaborative project that adapts quilting, a traditional medium, and blends local and other cultures to tell individual and community stories. Not only does Quilt Trails hang the quilt squares, but it also prints and sells guidebooks that map driving tours that direct tourists from barn to barn. Included in these guides are stories about the sites where the paintings hang and the people who erected them. According to the organization, each quilt square is "a history repository . . . giving a voice to the land and the buildings." 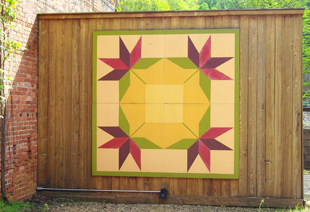 Quilting has long tradition in North Carolina, and some of the people involved in Quilt Trails are steeped in it. Odell Sluder of Avery County, for instance, has the Battleship square, made from a pattern designed by his mother and grandmother, displayed on his barn. The Stepping Stones square that hangs on the Linney family barn in Alexander County was designed by an ancestor, Elsie Clark Linney, in 1915. The “Ohio Star” block that graces Chloe Ramsey’s house had its origins in a quilt that Ramsey, a long time quilter, donated to a gift shop in Montreat, North Carolina, where it was purchased by Ruth Graham, the wife of famed evangelist Rev. Billy Graham. He subsequently gave the quilt to Pope John Paul II. The mural on Ramsey’s barn is a reminder that her artistry graces the Vatican half a world away.

The Quilt Trail squares also nurture and celebrate community ties and obligations. The collective stitching together of quilts, which are blankets made from assorted recycled fabrics that are cut into squares and sewn together, is a metaphor for the ambitions of the organizers of Quilt Trails. By placing painted quilt squares throughout Western North Carolina and connecting them with tour routes, participants see themselves as stitching together communities and the region. Pat Franklin, a member of the Madison County Arts Council, explains that quilts are “a true art form that play a needed service. Keeping us warm under the bits and pieces of [the garments of] everybody in the family or neighborhood.” She adds, referring to the commemorative intentions of Quilt Trails, “What better way to celebrate and honor the mountain women that raised us than by sharing their patterns with everyone that happens to drive by?” 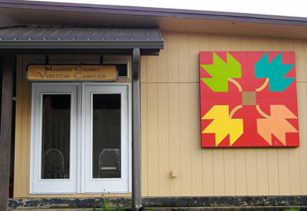 The Quilt Trails movement is not exclusive to North Carolina. The first quilt trail was founded in Ohio in 2001. Since then it has spread to 45 states. Betty Hurst, a quilter and activist in the promotion of regional economic redevelopment through local crafts, first encountered Quilt Trails in Tennessee in 2005. She introduced the idea in Madison County, North Carolina and from there the trail has expanded into Yancey, Mitchell and other western counties.

The burgeoning Quilt Trail has drawn on the diverse talents of local enthusiasts, not all of whom are North Carolina quilters. Some, like Martha Abraham, brought their own traditions from elsewhere. She grew up in the Ozark Mountains of Arkansas, but has now applied her quilting skills in Ponder Cove, North Carolina, where a square based on one of her designs decorates her Bed and Breakfast. She says of quilting, “Mountain folk are mountain folk and mountain craft is mountain craft. I look out at that barn quilt and am reminded of my grandmother, who quilted until she was almost eighty.” Martha’s cultural heritage is now on display thanks to Quilt Trails. For Judie Henson, her quilt designs recall farm life in Illinois where she grew up. For transplants like Abraham and Henson, Quilt Trails provides the means to share their heritage and that of their former homes with their new communities. 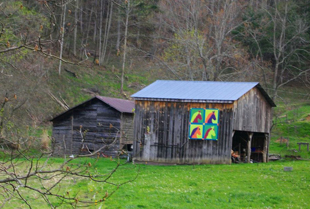 The Quilt Trails movement taps the talents of non-quilters as well. The quilt squares that Quilt Trails installs on buildings are large paintings rather than actual fabric quilts. Consequently, the organization recruits artists to create designs and painters to copy over the patterns. Folk artist Heidi Fisher, for example, worked with Avery County resident Carter Wiseman to produce an original design for his quilt block, which was inspired by a story from his childhood. Despite her lack of sewing expertise, Fisher enjoyed the challenge of mimicking the style of a quilt pattern. “I appreciate tradition,” Heidi explains, “but I’d rather try something new.” Her hope is that her original design might one day be adopted as a family pattern and that “this piece of folk art will be passed down from generation to generation.” Other innovations have been incorporated into the quilt squares that adorn the barns of Western North Carolina. For example, Lisa Mandle designed the first quilt square installed in the state. She did so by using Electric Quilt computer software to create a design “with a kind of pop-art feel.” (This milestone, called Zuma Too, was painted over subsequently but later restored and remounted by the Madison County Arts Council.) The quilt block at Double Tree Farms, a horse farm owned by Cathy and Andy Bennett, is a fusion of modern art and traditional craft; the quilt square, which prominently features horses, draws inspiration from Andy Warhol’s pop art. 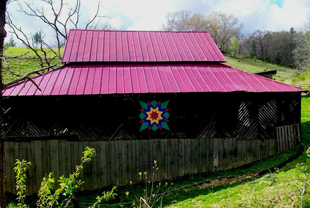 The designing, creation, and installation of most quilt squares is a group effort. This form of commemoration almost certainly has captivated people across the region because it is a communal undertaking in an age when community bonds may appear weak or even non-existent. Not one square on the trail has been put up by a lone person – the task is simply too much for one person to undertake alone. Quilt trail organizers encourage people to participate in whatever way they can, so as to foster new community ties and to harness those community loyalties that already exist. In most cases, people who are interested in putting up a quilt square on their property contact their local arts council. Then, they set up a meeting to discuss possible quilt patterns and any specific inspirations they want to incorporate into the design. Together with local artists, designers and volunteers, barn owners paint the square and hang it. Such was the case with the “Grandma’s Flower Garden” square that was put up on the Powell Barn in Upper Laurel, North Carolina. Citizens of the community met and painted the square together. Then local fire department volunteers hung it. 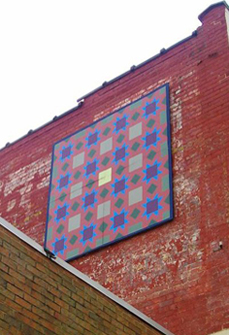 Another striking example of this communal spirit hangs on the Ray Homstead barn, located in Madison County on property once owned by Lena Ray, a much beloved member of her community. According to the Mars Hill Barn Quilt Loop brochure, “Lena was well-known for the beautiful flowers that she always had growing on the property, even into her 80s.” To commemorate her, organizers picked a quilt square that included irises. Another quilt square in Madison County is itself a memorial to local community spirit. The quilt square, which hangs on the Spring Creek Community Center, celebrates local farmers who brought rocks from their farms to build the building. Three quarters of a century later, the community once again came together to immortalize the erection of the building and its subsequent service for over 50 years as a school. The block incorporates the schoolhouse quilt pattern and the school’s colors on this building.

The quilt trails of Western North Carolina are a distinctive form of contemporary commemoration. The movement continues a tradition of community sponsored public art created by private groups. Each square is born of a collaboration between the property owners commissioning the block, the directors of the corporation, and the artists they employ. Often projects require an even larger community effort. Western North Carolinians (and their counterparts elsewhere in the nation) have fashioned an uncommonly inclusive form of contemporary commemoration that uses public art on private property to simultaneously honor traditional crafts, promote tourism, remember individuals, and celebrate communities.