The idea to preserve the Guilford Courthouse battle site came to David Schenck, a judge and prominent railroad attorney, while visiting the battlefield in 1886. He lamented that the site of an important Revolutionary War contest “was a tangled wilderness of briars, old field pines, broom sedge, and every species of wild growth which comes up on old worn out fields.” “To redeem the battlefield from oblivion” and to turn it into a shrine to "American patriots" who participated in this battle for liberty and independence,” Schenck and several other local notables chartered the Guilford Battle Ground Company. With money raised through the sale of 25 dollar shares in the company, they began buying up the battlefield grounds.

Once the site was in hand, the task of developing it began. Schenck and his partners were pioneers in battlefield preservation. In the late 1880s, they had few models to draw upon when they began “adorning," as they put it, the site with monuments. No other Revolutionary War site had been extensively preserved. They may have drawn inspiration from the widely publicized preservation and memorialization efforts under way at the Civil War battle site Gettysburg, Pennsylvania. 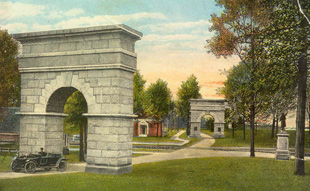 The founders of the company had grand ambitions for the site, which they envisioned as a national memorial rather than a local attraction. Their plans, as they evolved, reflected nineteenth-century ideas about historic sites as shrines made sacred by the heroic sacrifice of earlier patriots. The aim of the company was to elicit awe and stimulate patriotism rather than to accurately recreate the battle site itself. The preserved site would be less a classroom where visitors would learn dry history than “a Mecca of Patriotism and a holy shrine for the hearts of the people.”

To create this shrine, the company set about transforming and “redeeming” the landscape. In 1893, fifteen years after the start of the preservation campaign, the company boasted that the grounds were “covered with a luxuriant crop of oats which spreads over all its surface as a green carpet. All the ancient roads leading through it which had been abandoned for half a century have been reopened and put in fine order and every prominent point on the battle field marked.” A picturesque lake had been created by damming a spring and a baseball diamond, a small museum, a restaurant, and picnic shelters had been constructed.

In addition to creating an inviting pleasure grounds, the company began to fill the landscape with monuments and markers. A few markers were erected with company funds which came from modest appropriations from the state legislature and from donations. But at least five monuments were wholly or partially paid for by individuals or families wishing to honor ancestors. Governor Thomas Holt of North Carolina, the Maryland Historical Society, and the General Assembly of the Presbyterian Church also sponsored monuments. Because of the difficulties of raising funds to erect monuments, and because of the broad mandate for the site as a shrine, the company allowed nearly anyone with money to sponsor a monument to whomever they pleased. Because federal funding was difficult to secure, the company received only federal support for the three largest and most expensive monuments. In keeping with the company’s goal of creating a shrine, the remains of six notable North Carolinians, including two North Carolinians who signed the Declaration of Independence, were also re-interred on the grounds. The site, in short, became a shrine to the memory of much more than just the events of the battle on March 15, 1781. 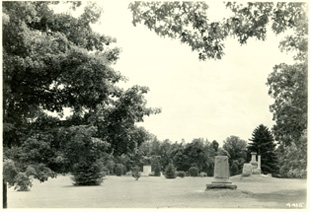 Although Schenck and the site’s directors interpreted the site as a sacred shrine, they apparently had no consistent plans regarding the organization of monuments on the grounds. The earliest monuments seemingly were scattered haphazardly; a few were located at points of historical significance but others were not. After 1897, a pattern of sorts emerged, suggesting that the directors had settled on a plan to build a grand avenue of monuments on the site. This avenue of monuments, which remained until the National Park Service took control of the site in 1933 and extensively redesigned it, was the most striking expression of the combination of historical enthusiasm and patriotism that shaped the park’s early development.

The company understood that the site would fulfill its mission only if it attracted visitors and instilled in them the proper sentiments. Recognizing that many visitors would reach the comparatively inaccessible site by means of the Old Cape Fear and Yadkin Valley Railroad, the directors erected a train platform at the grounds. Each July 4th, special excursion trains brought visitors to the site for patriotic orations, boat rides, and ice cream, with the festivities often culminating with the unveiling of a new monument.

When visitors stepped off the excursion train to attend one of these July 4th celebrations during the nineteen-teens they enjoyed unobstructed views of at least five monuments. Looking carefully, they might spot another seven or eight just from the train platform. Close to the railroad tracks were two imposing stone arches memorializing North Carolina Generals William Lee Davidson and Francis Nash. Spanning the road into park, these arches acted as gates to a “Mecca of patriotism.” Although both men had died before the battle of Guilford Court House took place and, consequently, had no direct connection to battle, the Battle Ground Company nevertheless deemed the men worthy of memorialization because they had been North Carolina patriots. To the left and right, arrayed along an extended avenue were the site’s most impressive monuments. 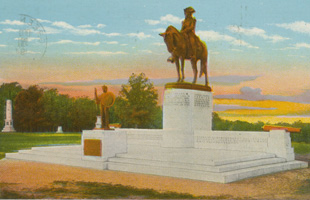 After 1915, visitors also immediately saw an elaborate monument to General Nathaniel Greene. Standing on the highest point on the grounds, the Greene monument was the most expensive monument erected on the site. The monument’s location is revealing because it highlights the company’s priorities when developing the site. As the founders filled the park with a jumble of seemingly unrelated monuments, they showed less and less concern about placing monuments in locations of historical significance. While some of the early monuments had been located to mark historic locations of the battle, the Greene monument was placed on a spot that the Revolutionary War general had never visited. The placement of the Greene monument and other monuments along the avenue was apparently dictated by aesthetic concerns rather than any historical justification.

To the west within a short walk of the railroad tracks were located multiple graves of important Revolutionary figures. A statue that commemorated Kerenhappuch Turner, a Maryland woman who had ventured onto the battlefield to nurse her wounded son was, the directors boasted, “the first monument to a Revolutionary heroine erected in the United States.” Nearby stood a monument – the No North-No South monument – that was meant to celebrate the reconciliation of the North and South through their shared memory of the Revolution. It stood as a reminder that the sectionalism that flared during the Civil War had not always divided Americans. 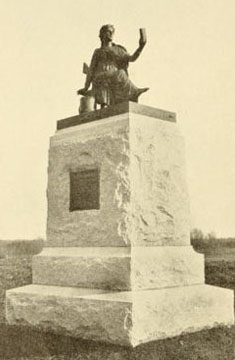 The first monument to the east of railroad tracks and through the Nash arch was a large sculpture of Clio, the Muse of History. At first glance, the statue of Clio, a figure from Greek mythology, may seem to have been out of place at the preserved battle site. Yet the statue was consistent with Schenck’s reason for preserving the site as a shrine to nationalism. At the dedication of the monument, Professor C. Alphonso Smith of the University of North Carolina declared that the statue “symbolizes no detached date or occurrence in history. It is itself the august spirit of history. [...] This Battlefield, already a Mecca of patriotism, will yet become in the expanding life of this commonwealth a stepping-stone to a larger national consciousness and a chapter in the epic of a nation's birth.” Schenck and the other founders hoped that Clio would serve as the muse to all visitors to the site.

The nearby monuments along the avenue were intended to provide inspiration for patriotic musings. Two monuments commemorated celebrated battles at Kings Mountain and in nearby Almance County that were popularly associated with North Carolina patriotism. Although Kings Mountain was actually fought in South Carolina, confusion over the exact location of the battle enabled many North Carolinians to claim that battle had taken place within their state. Similarly, during the late nineteenth century, many North Carolinians linked the 1771 skirmish between anti-tax “Regulators” and colonial forces as a precursor to the American Revolution. Acutely aware of Virginians’ tendency to magnify the contributions of Virginia to the Revolution, the company’s directors and many other North Carolinians responded by asserting that North Carolinians in fact had fought the earliest battle of the Revolution at Alamance. Thus, the history recounted under the auspices of the Guilford Battle Ground Company was intended to foster state pride no less than American nationalism.

Continuing westward along the avenue of monuments, visitors encountered monuments to Joseph Morehead and David Schenk, former presidents of the Guilford Battle Ground Company who had overseen the preservation of the site and the erection of the monuments there. More than unbecoming vanity lay behind these two monuments. The site was a shrine to patriotism and these two leaders of the preservation of the battlefield were patriots whose contributions were deemed as worthy of commemoration as the deeds of the men who had fought and died on the site. In addition, any private individuals or groups who had sufficient funds to memorialize a North Carolina patriot could do so. Thus, few visitors probably found it odd or inappropriate that monuments to contemporary historical enthusiasts adorned the battlefield. Indeed, only one of the seven monuments lining the west portion of the avenue of monuments had any relation to the actual battle. The final monument in the row, dedicated in 1909, honored Doctor David Caldwell, who had attended the wounded after the battle. 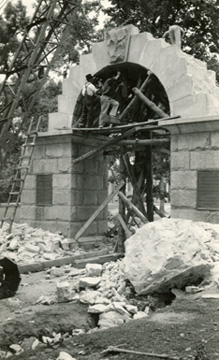 In their attempt to create an impressive and evocative shrine, the founders of the Battle Ground Company may have gone too far. Not every visitor fell under the sway of Clio or appreciated their efforts to inspire patriotism. A visitor in 1917, for instance, grumbled: “My first impression of this historic spot was one of extreme annoyance. A group of patriotic citizens, animated by the very best intentions, acquired the battleground some years ago. They have since decorated it lavishly with granite tents, boulders, pyramids, and triumphal arches until it now resembles a suburban cemetery. The patriotism that inspired the great effort involved is not questioned; the good taste is. Bronze figures of Clio and statues of former presidents of the Battle Ground Company--no matter how public spirited these citizens may have been--seem sadly out of place upon this historic field.”

This visitor’s critique of the battleground as it appeared in the early twentieth century testified to shifting ideas about memorialization and historic preservation. Increasingly, interpreters of historic sites emphasized the goal of “authentic” recreation of historic sites so that visitors could observe them as they would have appeared in the past. At the same time, interpreters who were swayed by the growing influence of professional historians placed a new emphasis on teaching the latest “scientific” history. Consequently, the romantic nationalism that had been so conspicuous in the founding of the company and the interpretation of the battlegrounds fell out of fashion. Beginning in 1937, the NPS removed or relocated all but one of the monuments along the avenue of monuments that had been the centerpiece of the Guilford Battle Ground Company’s vision for the site. The lake was drained and the baseball diamond removed. Today, the park bears little resemblance to the vision shared by Schenk, Morehead, and the other founders of the Guilford Battle Ground Company. Much of the area is now forested, and underbrush has replaced their original vision of a "Mecca of Patriotism."

For “then and now” photos showing how the landscape has changed over time click HERE.

For a display of how the Battleground developed chronologically click HERE

To explore a map of the battlefield as it was in 1934 click HERE.