What Are Commemorative Landscapes?

What are commemorative landscapes? Why are they important? What do they tell us about the people who created them and who continue to use them?

Commemorative landscapes, in many instances, are so straight-forward that we may take them for granted. The Gettysburg battlefield, the Pearl Harbor memorial, Mount Rushmore, and the Mall in Washington D. C. are conspicuous examples of commemorative landscapes. Each of these spaces has been identified as having exceptional symbolic meaning not only by government officials but also by the public. These are sites where Americans are prompted to reflect on the past, the nation, and their relationship to both. These places are hallowed spaces redolent with layers and layers of complex meaning acquired over generations. Such spaces are so obvious that mapping them may appear superfluous. 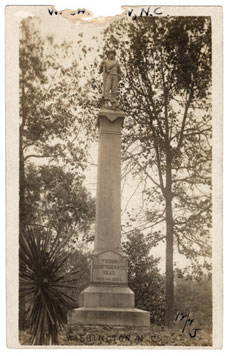 Most commemorative landscapes, however, do not occupy a place in the national imagination comparable to Gettysburg, Plymouth Rock, or Mount Vernon. Instead, the North Carolina, and American, landscape is dotted with otherwise minor monuments and memorials to events, people, and causes that few of us are familiar with or may even have heard of. In these spaces, the monuments' creators translated their understanding of the past and dreams for the future into a physical form that they hoped would withstand the ages and fire the imaginations of their descendants. Even modest commemorative spaces — a small memorial garden, a chiseled boulder, an inconspicuous column — in obscure locations can express the deepest ambitions and anxieties of the communities who erected them.

The groups who create commemorative landscapes are stirred to action by their desire to compensate for the fleeting quality of human memory. Because memories are transitory, people yearn to make them permanent by rendering them in physical form. Just as individuals resort to diaries, photographs, genealogies and memoirs in their attempts to cling to the past, so too societies strive to remember by creating attics of memory. By erecting monuments or marking off commemorative places, we anchor our memories in space and time. These spaces and objects become infused with commemorative qualities, serving as physical markers of memory which preserve the past in the present, underscoring the connectedness of the two.

At first glance, the human impulse to remember, to commemorate is straight-forward, indeed, innate. Virtually all human societies acknowledge that memory forms an essential component of who they believe themselves to be and how they would like to be viewed by others. From the smallest village to the most populous nation, people invariably fashion their own image of the world, and their place in it, by crafting an accepted version of the past. By doing so they establish a collective genealogy of their identity. Their version of the past may trace a chronology readily recognizable to others, but events within their history are assigned a distinctive significance that may seem curious, even perverse to outsiders. For example, since the late eighteenth century some North Carolinians have claimed that the so-called Mecklenburg Declaration of Independence was the first call for independence made in the Thirteen Colonies before the American Revolution. Purportedly, a committee of citizens of Mecklenburg County were inspired by the battle of Lexington to sign the Declaration, proclaiming their independence from Great Britain, on May 20, 1775. On the basis of this alleged act, North Carolinians boasted that their revolutionary zeal had led them to anticipate the United States Declaration of Independence by more than a year. The authenticity of the Mecklenburg Declaration has been disputed since it was first published in 1819, more than four decades after it was supposedly written. That the Mecklenberg Declaration probably is spurious does not detract from the larger point; North Carolinians who were eager to bolster the reputation of their state for patriotism and revolutionary ardor elected to magnify (exaggerate?) the significance of an event and then subsequently commemorate it with a state holiday and in the state capitol, the seal and the flag of North Carolina, and public school textbooks. 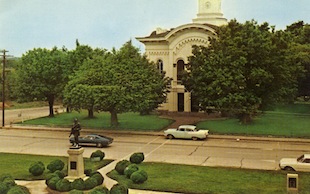 As the example of the Mecklenberg Declaration indicates, the creation of a collective memory and commemorative landscapes entails choices. Only some events, people, or ideas warrant commemoration. Groups understandably do not commemorate mundane events, people, or undertakings. But the major historical figures, causes, and events that typically prompt commemoration often are open to complex and contradictory interpretations. The memory of Governor Charles Brantley Aycock is illustrative. Aycock looms large in the early twentieth century history of North Carolina. During his tenure (1901-1905) as governor, he was an advocate for the improvement of the state's inadequate public school system. After his premature death in 1912 he was honored across the state as the Education Governor, and schools, campus buildings, and streets were named after him. Left unacknowledged in his commemoration was his role in the state Democratic Party's political and extralegal campaign to drive blacks from public life at the turn of the century. For most whites, Aycock's commitment to white supremacy was uncontroversial. For the black citizens of the state, Aycock's effort on behalf of white supremacy left them virtually voiceless when it came to Aycock's public commemoration.

The decision to widely honor Aycock for only some of his public actions highlights crucial questions about any commemoration. Who selects what is to be commemorated? What form should the commemoration take? Where should it be situated? Who should pay for it? Who should be acknowledged by or participate in the commemoration? The answers to these questions reveal a great deal about not only how communities have conserved and recalled their past but also about who is a member of the community and who exercises authority over the past in the community.

This digital archive is intended to remind us that we should not take for granted the inevitability of the commemorative landscape that graces North Carolina. The commemorative landscape of North Carolina that exists today is the consequence of several centuries of investment, labor, and design by activists intent on bestowing their version of the past on subsequent generations. Even in those instances when we lament what they elected to honor or ignore we can both appreciate the impulse that fueled their efforts and ponder their legacy.