In 1898, when wealthy industrialist Julian Shakespeare Carr made a donation for a monument to Worth Bagley (the first American officer killed in the Spanish-American War), he gave only one dollar. When a local newspaper reported the amount of his donation, no one questioned why so rich a man gave so little. The appropriateness of the small donation hints at a general understanding during the late 19th and early 20th centuries of how monuments should be funded.

In 1898, almost immediately after Bagley's death, there was talk of building a monument to his memory. In May of that year, the Morning Post began a fund for the monument, and soon the Raleigh News and Observer and the Fayetteville Observer announced they, too, would start subscriptions for a monument to Ensign Bagley. Noting how other communities had already begun collecting for the monument, the Observer declared, “Let everyone contribute his mite to this noble object.” The newspapers began publishing the names of donors, at first every day and later every week. Other papers soon followed suit and by September pledges totaled $2,581.95. The majority of donors gave a dollar or less. In addition to Carr, other wealthy North Carolinians, including newspaperman Samuel A. Ashe, former UNC President Kemp Battle, and monument builder E.E. Moffitt, each donated exactly one dollar. That the wealthy, middling, and lower classes gave equal contributions created an appearance of a shared cause and of collective ownership. When the statue was unveiled, newspapers celebrated the small contributions that had paid for such an elegant monument. Thus, although Carr could easily have paid for the entire monument, his modest donation was in keeping with contemporary custom. Had he paid for the statue himself, he would have cheapened the monument’s meaning and raised eyebrows. 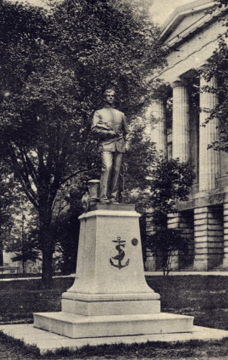 The method of fundraising that erected the Bagley monument in Raleigh was commonplace in the United States. Whereas European governments routinely funded monuments, in the United States, almost all public monuments were funded by private donations until well into the twentieth century. The American practice of privately funded commemoration was an expression of Americans’ notions of localism and democracy. Communal fundraising on behalf of monuments bestowed a democratic legitimacy on the monuments that no government could provide. Monuments in the United States were assumed to be expressions of community consensus rather than artifacts imposed on the landscape by public authorities. In theory, each monument was an expression of the will of the people.

Erecting monuments required the mobilization of whole communities. To fund the Bagley monument, for instance, numerous civic organizations, militia units, student bodies, and townships created subscriptions for their members, utilizing pride in one’s community to motivate contributors. When the University of North Carolina at Chapel Hill decided to raise money for its own Confederate Monument, each class had its own fund. In addition, a fund was set up for the residents of each county in North Carolina, allowing alumni to donate twice. 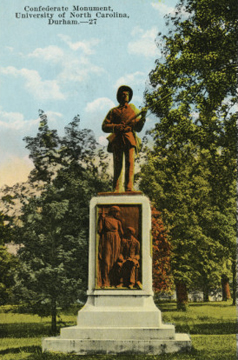 Another impetus for privately funded monuments was the difficulty and time required to secure public funding. Although raising money privately was difficult it was still often quicker and easier than trying to tap public funds. Although first conceived in 1857, the Nathaniel Greene statue at Guildford Courthouse was not begun for another half century. Monument advocates spent over a decade of lobbying to receive federal funds until finally, in 1911, Congress appropriated $30,000 dollars for the monument. Numerous other monuments were planned, funded, and erected across the state in much less time.

Government funding also came with strings attached. Many monument builders learned that state money was not worth the trouble. When $10,000 of public funds were appropriated for the Francis Nash and William Lee Davidson arches at the Guilford Courthouse battleground the enabling legislation included a requirement that the arches be built on public land. The group that owned the site, the Guilford Courthouse Battle Ground Company, offered the state two tiny parcels of land —just big enough for the arches’ footprints—in the middle of their park for one dollar. Even so, the monuments were almost erected elsewhere. Although the sponsors of the legislation intended that the monuments be built at Guilford Courthouse, members of the Battle Ground Company worried that, at the last minute, the Governor of North Carolina might use his authority to locate the monuments elsewhere. Indeed, other communities lobbied the governor to pick them to be the home of the monument. Eventually the governor selected the Guilford battle site, but the experience discouraged the Battle Ground company and other would-be monument builders from approaching the state for funds. Of the more than thirty monuments dedicated at Guilford Courthouse Battle Ground, only the three largest monuments (the Nash and Davidson arches and the Nathaniel Greene monument) received federal funds. The rest of the monuments at the site were privately funded, often by an organization, though sometimes by an individual. In a few instances, modest contributions of state funds supplemented private funds raised by the Battle Field Company, but otherwise the park and its monuments remained privately funded. 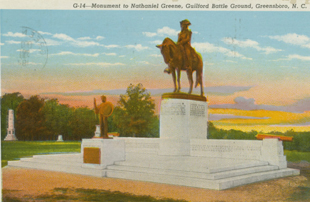 Even token federal support was not forthcoming for monuments to the Confederacy. This remains true today. When the Sons of Confederate Veterans (SCV) recently built a monument to General Joseph E. Johnston at Bentonville, they placed the monument on private land because the Bentonville Battlefield State Historic Site would not allow them to use public land. To ensure control of the monument’s design, the SCV never asked for state or federal money. 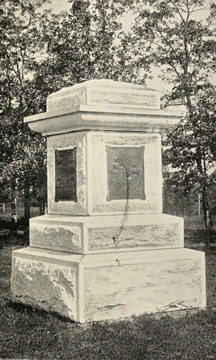 Not all monuments were paid for using the “small-donor model” described above. This method of monument fundraising meant a proposed monument had to pass a critical threshold of popular support. Groups that failed to marshal a broad and influential base of support could not expect to raise adequate funds for their monuments. It often took years to raise the funds for a monument because of the necessity of finding so many donors. For example, not until 1907, nine years after fund raising began, was the Worth Bagley monument unveiled. Because of the difficulty of fund raising, some monuments were funded by extremely small groups or even individuals. When subscription and appropriations failed, turning to a single donor offered a last resort. After a bill appropriating the funds was defeated in the state legislature, Confederate Veteran Ashley Horne donated the incredible amount of $10,000 to build the Women of the Confederacy Monument. Usually though, monuments with one funder were much smaller. The Guilford Battleground Company approached Governor Thomas Holt and convinced him to pay for a monument to Major Joseph Winston. However, because of the singular source of funding, only a simple marker could be bought, instead of the impressive memorial first imagined. Known as the “Holt monument,” a sculpture of Joseph Winston was added on top of the original monument a few years later once additional funding had been acquired. Sometimes fundraisers could not garner even this minimal support. In 1893, desperate to quickly find funds for a monument to unveil for the Guilford Battleground Fourth of July Celebrations, Joseph Morehead offered to let Julian Carr choose any individual to honor if Carr would fund the monument; Morehead further promised “it will be called the Carr statue,” if only Carr provided the 350 dollars needed. Carr declined and the proposed monument was never built. Without widespread support for an idea, a monument effort was almost sure to fail.

Through such fundraising individuals and groups asserted ownership over the past. When African-Americans gathered money for the Worth Bagley statue, they made an implicit claim upon the memory of Ensign Bagley, his sacrifice, and his cause. Bagley died for America, and “The Colored Citizens of Durham” wanted recognition as part of that America. Other disfranchised groups also exerted political influence in the late 19th century through fundraising. Fundraising provided an especially important means for women to enter the public sphere in the late nineteenth-century. Women—such as E. E. Moffitt and Mrs. Henry A. London—dominated the process of raising funds. Women were the driving forces behind the creation of a Confederate landscape still found in many small towns and in front of countless southern courthouses. Except in rare cases—such as the Women of the Confederacy monument in Raleigh—men remained the object of commemoration. Nevertheless, fundraising by women ensured public recognition of them, their organizations, and their contributions to civic affairs.

The private contributions that paid for monuments, in sum, frequently carried as much meaning as the statues they paid for. The funds raised measured not only a person’s, an organization’s, or a community’s commitment to the specific cause or individual being memorialized, but also their devotion to their community. Monuments were one important measure of a community’s civic culture and self-esteem. Although modern monument building efforts are in many ways distinct from their predecessors during the nineteenth and early twentieth centuries, donating to a monument remains an important act of civic engagement.