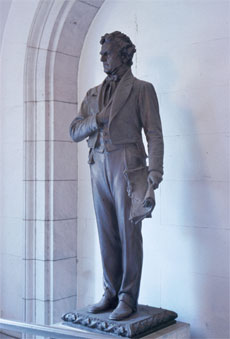 The statue of North Carolina Supreme Court Judge Thomas Ruffin (1787-1870) that stands in an alcove at the entrance of the North Carolina Court of Appeals building in Raleigh was erected in 1915, toward the end of an intensive period of memorialization that had begun before the turn of the twentieth century. Following the upheavals set in motion by Reconstruction, the state’s leaders sought to reinforce in the public’s imagination a coherent story of Southern history that began with the Founding Fathers, continued through Robert E. Lee, and came down to the contemporary moment in which political control rested securely in the hands of a conservative Democratic Party. In ways that resonated with the broader narrative of the “Lost Cause,” the campaign of monument-building that included the Ruffin statue’s creation solidified a historical narrative that emphasized the state’s steady economic progress guided by a spirit of reconciliation and reunification with the North.

After the defeat of the “Fusion” party (made up of Populists and Republicans)—which was achieved most dramatically through the deadly coup d’état in Wilmingon in 1898—the Democratic Party had swept into power on a platform of white supremacy. The erection on the Capitol grounds of monuments to Civil War governor Zebulon B. Vance as well as heroes of the Confederate and Spanish-American wars reflected “a remarkable sense of shared purpose,” according to architectural historian Catherine Bishir. “With competing visions of the state’s past, present, and future all but silenced in official discourse, leaders shared a powerful sense that both in politics and in the culture at large, matters had been returned to their correct alignment.”1 The idea of honoring Judge Ruffin with a statue in a nearby court building came out of this context of renewed pride and reflection.

Ruffin, who sat on the North Carolina Supreme Court from 1829 to 1852 and again in 1858, and who served as Chief Justice from 1833 to 1852, had become widely recognized by the early twentieth century as the most distinguished jurist in the state’s history. He earned national recognition, for example, for his precedent-setting opinion in Raleigh and Gaston Railroad Company v. Davis (1837), which authorized a process of eminent domain that greatly eased the construction of railroads and other infrastructure improvements. 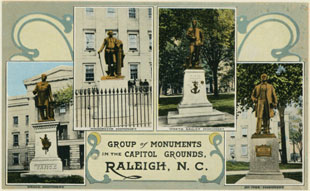 Though he did not fight for the Confederacy, Ruffin was ideologically sympathetic to the Confederate cause and remained so to his death. In one of his earliest opinions, he bolstered the authority of slave owners by granting them practically limitless powers of discipline over their slaves: “The power of the master must be absolute,” Ruffin wrote in State v. Mann (1829), “to render the submission of the slave perfect.” State v. Mann became the most notorious opinion in the entire body of slavery law—as well known to northern abolitionists, who considered the opinion emblematic of everything wrong with the slaveholding South, as it was to slave owners, who found its rhetoric emboldening. Although State v. Mann was not mentioned in the ceremony in which the statue was dedicated, the governor and other distinguished speakers at the occasion would surely have borne it in mind.

The statue was designed by Francis H. Packer, a New York artist who had studied with Augustus Saint-Gaudens. Packer also designed the statue of Worth Bagley, said to be the first American officer killed in the Spanish-American War, on the Capitol grounds (1907), as well as the Nathaniel Greene monument commemorating the Battle of Guilford Courthouse in Greensboro (1915). The building in which it was placed was—fittingly—the recently completed home of the North Carolina Supreme Court (which moved to a newer building in 1940, leaving the old building ultimately to house the Court of Appeals). 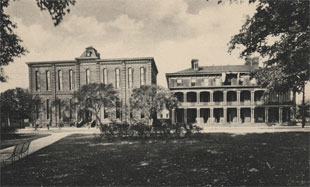 Rendered in heroic scale on a pedestal of polished white marble, the bronze figure makes a commanding presence. Dressed in swallow-tail coat and cravat, Ruffin stands erect in a formal yet unguarded position invoking a classical style of ideal masculinity that was refined in the eighteenth century. In his left hand is a symbol of his office, sealed legal papers secured with a clasp imprinted with the scales of justice. His right hand is tucked inside his waistcoat. This pose, which invokes a long tradition including—perhaps most famously—Jacques-Louis David’s portrait of Napoleon, originated in the conventions of classical sculpture. In Anglo-American representational art it came to be associated with depictions of wealthy and elite white men.

The statue was funded by the state bar association as well as members of the Ruffin family. At the dedication ceremony on February 1, 1915, J. Crawford Biggs, president of the bar association, emphasized the importance of placing likenesses of the state’s great historical figures on display: We have not exerted ourselves to stimulate a healthy State pride, by preserving in marble and bronze the records of the past, by erecting statues and suitable memorials to commemorate the name and fame of the great men whose services have enriched and glorified the traditions of our Commonwealth. Accepting the statue for the state, Governor Lock Craige mixed colonialist and Enlightenment rhetoric to underscore the broad reach of Ruffin’s reputation: He is recognized everywhere as one of the greatest judges that our race has produced. In the uttermost parts of the earth, where the English jurisprudence exercises its beneficent rule, he speaks and will speak to legislatures, to courts, and to executives, directing and enlightening them in the way of truth and in the conception and the administration of justice. In his keynote address, Chief Justice Walter Clark praised the accomplishments of one whose “fame as a Judge is established wherever the English law is known.”2

Francis Packer had translated Ruffin the man into the classical language of patriarchal authority, skillfully communicating an image of power and influence well suited to the temper of the time. Safeguarding the entrance of the old Supreme Court building, Judge Ruffin’s figure participates in a commemorative landscape still visible today, one designed to promote the order and stability of a vanished era.3

2. Addresses at the Unveiling and Presentation to the State of the Statue of Thomas Ruffin by the North Carolina Bar Association: Delivered in the Hall of the House of Representatives, 1 February, 1915 (Raleigh, N.C.: Edwards & Broughton Printing Co., 1915).