In a small, cinder-block building in Marietta, Ohio, workers at Sewah Studios engage in an art little changed since medieval times. Pressing letters into soil, pouring molten metal into the impression, allowing it to cool overnight under a pile of dirt, and then painting and baking the result, workers there produce cast aluminum historical markers. They custom design signs using seals and other emblems for over thirty states as well as municipalities, civic groups, churches, private companies, and individuals. In an era when the opportunities for historical interpretation and commemoration are legion and include fiberglass imbedment products as well as handheld devices, Sewah markers are distinctive and coveted. They can be found in Memphis at the gate to Graceland and in Oklahoma City at the site of the 1995 bombing, as well as at traditional sites such as river landings and colonial blockhouses, birthplaces and gravesites of notables, and Civil War battlefields. 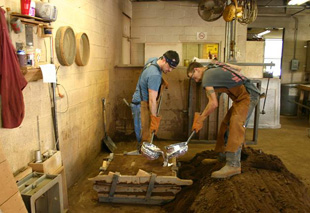 In North Carolina, researchers and administrators at what is today the Office of Archives and History have been at work remembering the past through aluminum markers since 1935, a remarkably long run for any government program. Signs are purchased with public funds made available through the Department of Transportation, their crews responsible for the erection and maintenance of the familiar silver-and-black placards. The signs, now approaching 1600 total, can be found in each of the 100 counties, in almost every community, at many crossroads. The design of the signs, typical of those of other state programs, resembles the pages of an open book. At the outset of the effort, an advisory committee, meeting in Saunders Hall on the UNC campus in September 1935, considered but rejected materials other than aluminum, including wrought iron and porcelain! At that first meeting, the professors on the committee made the decision to use three-inch tall letters, and to limit the wording on the sign to five or six lines of 20-25 characters per line. The aim was to produce texts that would be readable from the highway, at least by passengers stopped at a sign or traffic signal. The result has been to summarize the consequence of the event or person to the length of a Twitter message, a tweet. 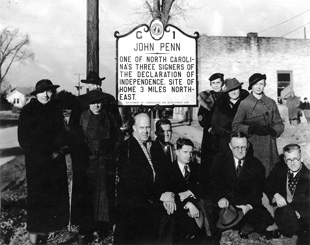 The dedication of the first North Carolina marker took place as Stovall in Granville County on January 10, 1936. Courtesy of NC Office of Archives and History

The effect can be either aptly descriptive or startlingly oblique. Caleb Bradham of New Bern invented Pepsi-Cola in 1898 in a pharmacy here. But John R. Brinkley, the notorious fraud and “goat gland doctor,” is simply a “medical maverick” in the words of the sign near his birthplace in Jackson County. Travelers might appreciate knowing that workers at Cedar Falls Mill in Randolph County “supplied clothing for the Confederate war effort” but surprised to learn that their principal product of the mill was scratchy underwear. Every black Marine in World War II trained at Montford Point in Onslow County. The composer of “The Orange Blossom Special” hailed from the backwoods of Craven County. No-till farming, a simple but effective curb on soil erosion, was introduced on a farm north of Waynesville. The Plott family, responsible for introducing to America the hound that bears their name, was from that same area. The bottom line is that passersby are made aware that an event of consequence took place nearby. 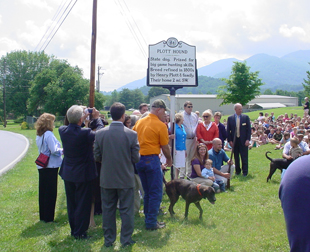 Plott hounds and Plott family members were on hand for the dedication held in June 2009 at a Haywood County school. Courtesy of NC Office of Archives and History

The chief measure used by the advisory committee to determine whether a site qualifies for a state historical marker is statewide historical significance. It is no surprise, then, that many of the markers describe military history, Revolutionary War statesmen, colleges and universities, explorers, governors, business leaders, and writers. Excluded from consideration are public schools, local officials, most cemeteries, and events or persons of primarily local importance. Twenty-five years must pass after a person’s death before he or she can be so commemorated. Similar guidelines apply to events. Consequently, in recent years, civil rights landmarks have been increasingly a focal point. From the first marker about an African American, that being John Chavis in 1938, to recent ones about Harriet Jacobs, George Moses Horton, Pauli Murray, and the Royal Ice Cream Sit-ins in Durham, the total number about black history now stands at 107. 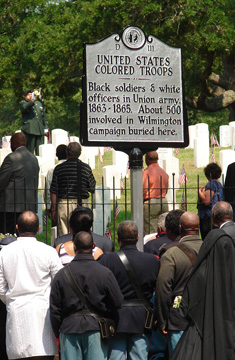 Oakdale Cemetery in Wilmington was the scene for the dedication of a marker about the U.S. Colored Troops. Courtesy of NC Office of Archives and History

Among those are subjects that are points of pride for communities, for example, the scene of the organization of the Student Nonviolent Coordinating Committee in 1960 in Raleigh, and the markers in Durham about Bull City Blues and Black Wall Street. Two recently erected markers acknowledge shameful events in the state’s history; one draws attention to the state’s Eugenics Board, which oversaw the forced sterilization of thousands of North Carolinians, and the other , erected in Wilmington in 1998, commemorates the burning of the newspaper office of Alex Manly, a flashpoint for the 1898 Wilmington Race Riot.

In some cases, placement of a state marker can constitute an effort to relate, in a site-specific fashion, major events or initiatives in national history, to wit, the marking of three former Civilian Conservation Corps camps across the state and the site of the first rural electrification cooperative in 1937. In other cases, attention is called to North Carolinians who played roles in events of national importance, Richard Warfington, a member of the Lewis and Clark expedition from Louisburg, and Daniel Kanipe a member of Custer’s battalion (a survivor) at Little Bighorn who lived in Marion. Individuals whose achievements are known to a few are thereby brought to the attention of the many: Charlie Poole, North Carolina’s premier old-time musician, and Omar Ibn Said, the Muslim slave and scholar. 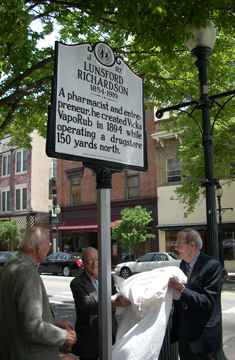 Three grandsons of Lunsford Richardson took part in an unveiling in Greensboro in 2010. Courtesy of NC Office of Archives and History

Since 1935, the state marker program has accepted suggestions and nominations for new signs. At the outset, this involved inquiries by mail to teachers, local historians, librarians, and journalists to compile a starting point list. More recently, the process has been formalized with an application and jump-started by e-mail and the digital revolution. So what motivates people to nominate a topic? In some cases it’s the desire to recognize the achievements of an ancestor or to remember an event to which the applicant has a personal attachment. Regional, state, and local pride can provide their own impetus.

Typically, a dedication and unveiling program is held when a new marker is set in place. That recognition, and the attendant publicity, is validation for the applicant and for the wider community. It is reassuring to know that the topic, which one has endeavored to bring to greater prominence, will be commemorated long after all those present are gone. With the development of the website for the North Carolina Highway Historical Marker Program in 2005, essays that expand upon the scant details found on the signs, along with GIS maps and photos, are only a few keystrokes away.


Michael Hill, co-editor of the revised edition of The North Carolina Gazetteer, is Research Branch Supervisor at the North Carolina Office of Archives and History, where he has worked with the State Highway Historical Marker Program since 1982, during which time the number of markers has increased by 370.