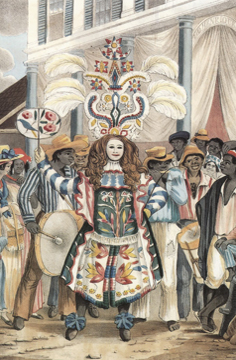 “Koo, Koo, or Actor-Boy” by Isaac Mendes Belisario, from "The Atlantic Slave Trade and Slave Life in the Americas," compiled by J. Handler and M. Tuite, and sponsored by the Virginia Foundation for the Humanities and the University of Virginia Library

Jonkonnu, (pronounced John Canoe) is an African American holiday celebration whose roots can be traced back to Jamaica and to the slave ships from West Africa. Historical records mention celebrations of Jonkonnu taking place near Edenton, N.C., as early as 1824. And, except for a single 19th-century historical reference to a Jonkonnu celebration in Suffolk, VA, historians have been unable to uncover any evidence that it was ever part of the culture in North America outside of North Carolina.1

The particulars of how Jonkonnu, a practice revived in the twenty-first century by Tryon Palace in New Bern, came to North Carolina in the nineteenth century are mysteries. To begin to solve the mystery, it is necessary to look south, past the border of the United States – and to look farther abroad than Jamaica and West Africa. This essay will not solve the mystery of Jonkonnu in North Carolina. It will make the case for thinking across borders and intellectual disciplines in order to provide answers for some of those mysteries.

The political borders of the United States have been more or less fixed for at least three generations, depending on which border is in question. Due to the relative longevity of these drawn lines, popular memory, when it reflects on history at all, can often neglect to consider and contemplate relationships between and among the U.S. and the nations within and around the Caribbean Sea. Classroom maps rarely show the Americas in their entirety. As such, rarely do most people consider that the economic and cultural histories of the Caribbean and Central America are intertwined with those of the United States – particularly in the U.S. South, and most certainly in North Carolina. Matthew Pratt Guterl calls this recast region of the U.S. South, the northern coast of South America, and the islands and lands within and bordering the Gulf of Mexico and the Caribbean Sea the American Mediterranean, which he defines as “the extraordinary network of rivers, seas, and waterways that served as the lifeblood of the New World, where long-standing currents and flows shaped the deeper history of slavery and freedom.”2 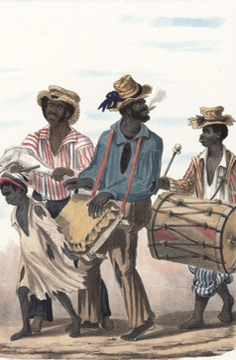 “Band of the Jaw-Bone John-Canoe” by Isaac Mendes Belisario, from "The Atlantic Slave Trade and Slave Life in the Americas," compiled by J. Handler and M. Tuite, and sponsored by the Virginia Foundation for the Humanities and the University of Virginia Library

People came to the Americas – some willingly, many not – for the purpose of generating economic profit. The colonization of the New World, North Carolina included, occurred as a part of these wider patterns to which Guterl refers. The British, French, Dutch, Spanish, and Portuguese colonized the Americas to establish trafficking of goods, and colonizers also trafficked in people in order to obtain those goods. Movements between the Caribbean and the United States in the nineteenth century often involved slaves transported for sale – and not only slaves of African descent. While it is true that the colonization of the Americas meant the death and removal of untold numbers of indigenous peoples, there were survivors, many of whom interacted with the more recent arrivants to their islands.

How do people commemorate events and lives that resist entering into focus due to little or no written evidence of their existence? The colonization of the Americas yields many opportunities to consider this question, including the presence of Jonkonnu in North Carolina. The origins of North Carolina Jonkonnu – also called John Kooner, Kuner, or Cooner in Wilmington and New Bern newspapers – are only a mystery if one confines the search to the borders of the state.3 As a practice, Jonkonnu is intimately connected to slavery – and slavery is intimately connected with the Caribbean. As part of the Middle Passage, ships frequently stopped in ports to sell or “season” slaves before continuing on to markets in New Orleans or Charleston.

The history of slavery might seem to be the smoking gun in this particular mystery of memory, but it is not. Rather, we should think about the people who, upon their entrance into the structural and hierarchical violence of Plantation America, vanish. If they leave behind no written record, they become erased from that written record on which much of history depends. Memory thus serves as record, and one place that memorial record surfaces is in performance practices.4 The conditions within New World slave economies were horrific, the events profoundly traumatic with echoes rippling into the present – but it would be a mistake to assume that even amid the trauma and disruption, people impressed into slavery did not pay attention to others around them, including the rituals and cultural practices of these others. Since the 1970s, many historians have focused on reconstructing as much of slave religious and cultural life as is possible, including the practice of performance.5 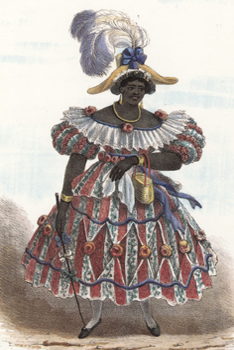 “Queen, or ‘Maam’ of the Set-Girls” by I.M. Belisario, from "The Atlantic Slave Trade and Slave Life in the Americas," compiled by J. Handler and M. Tuite, and sponsored by the Virginia Foundation for the Humanities and the University of Virginia Library

The practice of performance is a way to declare that one is not erased by the colonization of the Americas. It is also a way to declare that one will not be erased. Writing about the Mardi Gras Indians of New Orleans, whose performance practices are quite similar to those of Jonkonnu troupes, Joseph Roach addresses how physical performance functions as commemoration: A body possessed of its social memory – call it a “spirit” – is a body in some sense possessed of itself. It is even possessed of itself as property, to put it in the mystified but ennobling legal jargon whereby Anglo-Americans claimed certain inalienable rights. This amends somewhat the idea that the Mardi Gras Indians… danced for the repossession of territory, though that is true; they also danced to possess themselves again in the spirit of their ancestors, to possess again their memories, to possess again their communities. They danced to resist their reduction to the status of commodities. In other words, they danced – and they still dance – to possess again a heritage that some people would rather see buried alive.6

Tryon Palace presents Jonkonnu as important to local African American heritage – and the historical record backs that up. We cannot, however, excavate and recreate every single event leading to the performance of Jonkonnu at Tryon Palace. What we can do is ask how the practice arrived in antebellum North Carolina – because it did not originate in the state. As slavery is a circum-Atlantic and circum-Caribbean practice, so is Jonkonnu. The bulk of scholarship about the practice comes from the Caribbean, and presents the practice itself as a Caribbean phenomenon, deriving from masking traditions in both European colonizing powers (primarily England and France) and in West Africa. While this view of the practice is not out of step with the way that Tryon Palace presents and markets its Jonkonnu performances, it certainly broadens the geographic and cultural scope of Jonkonnu. 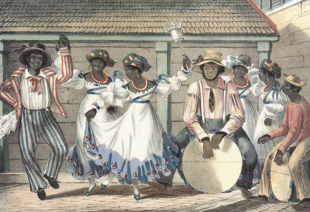 "French Set-Girls" by Isaac Mendes Belisario, from "The Atlantic Slave Trade and Slave Life in the Americas," compiled by J. Handler and M. Tuite, and sponsored by the Virginia Foundation for the Humanities and the University of Virginia Library

The practice shows up in the Bahamas in the present day as Junkanoo, where Clement Bethel has dated the practice as far back as 1801.7 Kenneth Bilby, who also recorded music of Jonkonnu troupes for Smithsonian Folkways records, characterizes Junkanoo in the Bahamas as the most commercialized version, where it is supported by the state as a major tourist attraction in Nassau on par with Carnival in places like Trinidad and Brazil.8 In Belize, the practice is connected with the Garifuña, who are descendants of West African slaves and indigenous Caribbean peoples.9 A variation of Jonkonnu occurs in Honduras, where there is also a sizeable Garifuña population – but according to Bilby, little documentation of the Honduran tradition exists.10

Jonkonnu – or John Canoe – in Jamaica has the most written and visual work about it. Swithin Wilmot chronicles two Christmas riots in Kingston over the right to parade and perform in 1840 and 1841.11 Jamaican-born artist I.M. Belisario produced a series of lithographs, including John Canoe performers, in 1837 and 1838; some of these lithographs appear in a 1969 article in Dance Magazine about contemporary Jamaican performance of Jonkonnu.12 Belisario’s lithographs also portray some of the same characters present in Tryon Palace’s Jonkonnu performances, including the Rag Man and the French Set Girls. 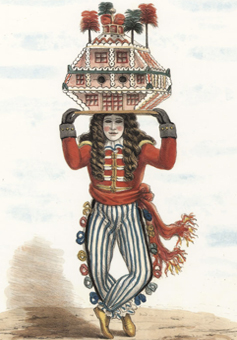 “Jaw-Bone” by I.M. Belisario, from "The Atlantic Slave Trade and Slave Life in the Americas," compiled by J. Handler and M. Tuite, and sponsored by the Virginia Foundation for the Humanities and the University of Virginia Library

These performances as described in secondary literature have important commonalities. First, Caribbean Jonkonnu is a performance that takes place between Christmas and New Year’s Day, and it is primarily – but not always – a performance by people of African descent. Second, these sources claim that many aspects of the practice derive from masking and mumming traditions in England. And finally, Belize, the Bahamas, and Jamaica – and North Carolina – are all former British colonies.

There are commonalities between Caribbean and North Carolinian performances of Jonkonnu, but there are also important differences. The masks of the performers do not always look the same, and urban and rural spaces also make for differences in performance. Yet people might look at the similarity in population – the secondary literature does classify most Caribbean Jonkonnu performers as hailing from West Africa, and that term flattens and consolidates many diverse societies – as well as the British Empire as the common colonizer, and wonder about the variations in practice among Belize, the Bahamas, Jamaica, and North Carolina. The chief difference among those former colonies (perhaps not so much Jamaica and the Bahamas) is the ways in which the state and its citizens constructed and negotiated racial categories.

Belize’s practice reflects indigenous influence, as the performers of Jonkonnu are primarily Garifuña. Practice in Jamaica and the Bahamas reflects the African descent of the majority of the population, as well as the presence of Carnival in neighboring islands. And practice in coastal North Carolina reflects the desire of whites to maintain their chokehold on economic and cultural power. The history of Jonkonnu in Wilmington in the late nineteenth century is the best example: in the late 1870s and early 1880s, Mayor S.H. Fishblate determined whether to allow or ban Jonkonnu performances each year, with the practice subject to increased regulation over time.13 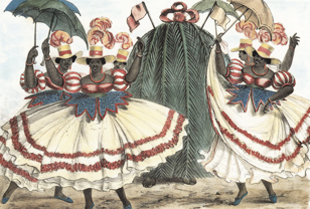 “Red Set-Girls, and Jack in the Green” by Isaac Mendes Belisario, from "The Atlantic Slave Trade and Slave Life in the Americas," compiled by J. Handler and M. Tuite, and sponsored by the Virginia Foundation for the Humanities and the University of Virginia Library

Given that Jonkonnu is a carnivalesque tradition, whose purpose was to temporarily overturn existing power structures, municipal regulation of Jonkonnu served to affirm white political supremacy in Wilmington.14 These efforts to contain, regulate, and sometimes ban Jonkonnu were part of the backdrop of racial tension leading to the well-known white-led overthrow of the legitimate Wilmington municipal government in 1898.

If one is after a definitive answer about the origins of Jonkonnu in North Carolina, a comparative analysis of performance practices in British colonies of the North Atlantic and Caribbean may reveal even more mysteries instead of solving any. Certainly the concerns of academia and of heritage tourism sites do not always converge – it is not a bad thing that Tryon Palace’s Jonkonnu troupe emphasizes local history over more hemispheric history. The benefit, however, of opening North Carolina’s political borders is immense. In the case of Jonkonnu, opening those borders shows North Carolina as an important member of a vast, diverse body of shared movement and shared memory.