There are eight American Indian tribes in North Carolina, giving the state over 80,000 tribal citizens and the largest population of American Indians of any state east of the Mississippi. Most tribes are located in the piedmont and eastern part of the state: the Occaneechi-Saponi, Lumbee, Sappony, Coharie, Waccamaw-Siouan, Meherrin, and Haliwa-Saponi. One, the Eastern Band of Cherokee Indians, is in the southwestern corner of North Carolina. Varied ecologies and histories make the commemorative landscape in each community quite different, but all regard knowledge of place as a powerful indicator of belonging. Landscape is as much cultural as it is physical; individuals create landscapes out of experience and hope. But landscape is also important to communities—it defines boundaries, provides subsistence, and nurtures loyalty to ideology or history.1 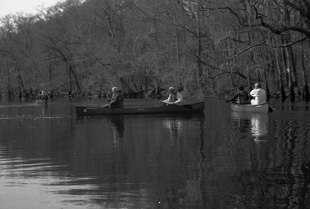 When a member of an American Indian tribe meets another tribal member for the first time, there are usually two questions asked: “who’s your people?” and “where do you stay at?” The first question helps the interrogator understand how their new acquaintance fits into the tribe’s kinship system, an elaborate storehouse of genealogical information and values, behavioral expectations, and community responsibilities. Indian people place paramount importance on the group, not on the individual, so if one meets an individual for the first time, the most important thing to understand is how that person fits into the group. The question “where do you stay at?” is equally important, however, for each larger community is made up of smaller settlements and neighborhoods that have their own histories and cultural associations.2 If one was raised “off,” or outside the tribe’s present geographical boundaries, as I was, then further inquiry usually follows the answer to this second question. After all, Indian communities have not been locked in situ over time; people have moved as circumstances demand since time immemorial. The important places themselves may change, albeit usually over the course of centuries, rather than decades. However, our sense of place--our connection to home--remains constant and is therefore a consistent and reliable source of knowledge about identity. This feeling cannot be described any better than the statement of an older Lumbee woman I know. We were discussing why Lumbees are compelled to return home, why the ones who have left—often for their entire adult working lives —come back to retire there. “It’s because the blood of our ancestors is buried here!” she exclaimed. This statement tied people (ancestors, blood) and place (buried here) together in a way that I believe represents all of North Carolina’s Indian communities. 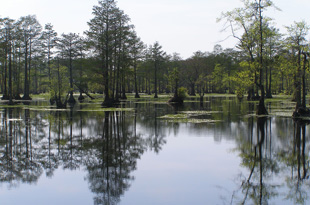 Hayes Pond, site of the Battle of Maxton, N.C. Courtesy of Prof. Lowery.

There are both visible and invisible markers of commemoration in Indian communities. Indeed, crossing into an American Indian territory in North Carolina can evoke a sense of invisible forces based on elements only the insider is aware of: elevation, how roads turn, local names of crossroads, how dwellings and farms are scattered, and what crops look like. Invisible markers also include stories about a particular location, baptism places, known but unmarked graves, and sites of historic significance that are unremarkable to the outside observer but are sacred to insiders. An example of the latter kind of invisible landscape is Hayes Pond in Robeson County, home of the Lumbee Tribe. In 1958, 500 armed Lumbees ambushed the Ku Klux Klan at Hayes Pond in a violent resistance to the Klan’s white supremacist ideology.3 There is no marker of any kind to note this watershed event, but the pond hosts silent pilgrims, students, and veterans of the clash who know what happened there and go there to remember. For insiders, landscape is a holistic experience that is commemorated simply by one’s awareness of it, and by traveling through it. Indeed, travel and migration, rather than static occupation, is a critical element of commemorating—in the sense of appreciating—landscape for North Carolina American Indians.

Commemorative landscapes can be known to outsiders through visible markers as well. These include cemeteries, museums, historic buildings or recreated villages, statues, public art, archaeological sites, and features of the natural landscape, such as rivers, swamps, pocosins, forests, mountains, valleys, and roads. The outsider may not always be able to interpret the significance of these places without help, but non-Indian travelers have told me that when driving through Indian communities they sense a deep history and mystery about the natural landscape—particularly our swamps, rivers, and pocosins—that they cannot access. Regardless, there are many examples of visible commemorations that evidence Indians’ efforts to interpret for outsiders through partnerships between Indian-run institutions and other entities such as universities and tribal, state, and county governments. 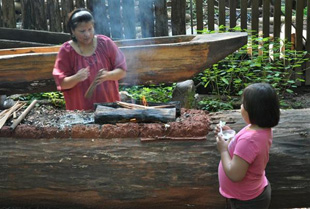 The Eastern Band of Cherokee Indians have invested considerable community knowledge into their two signature historic education sites, the Oconoluftee Village and the Museum of the Cherokee Indian, both located on Qualla Boundary in western North Carolina. The Village features demonstration sites of Cherokee crafts such as beadwork, finger-weaving, and weaponry, as well as recreations of ceremonial and civic structures and experiences for the visitor. The museum gives an in-depth overview of Cherokee history, focusing on the Eastern Band story, and includes state-of-the-art interpretive techniques. The Coharie in Sampson County have embarked on a partnership with UNC-Chapel Hill to document and preserve the historic Eastern Carolina Indian School, the location of their current tribal offices, as a historic site. This place is important not only to the Coharie but to Lumbees and Waccamaw-Siouans who also attended during the segregation era, when educational opportunities for Indians were limited to schools for their own race.

The Sappony, Meherrin, Occaneechi-Saponi, and Haliwa-Saponi, on the other hand, have a visible site of historic importance that is actually located in Virginia—Fort Christianna. Following the devastating Tuscarora War of 1711-1713 in Northeastern North Carolina, Virginia’s governor invited refugees from Indian groups who spoke languages from the Siouan and Iroquoian language families to reside at Fort Christianna, learn English, become Christian, and receive the protection of the state from English settlers who wanted to seek revenge. While the Siouan-speaking groups, who were all closely allied politically and culturally, agreed, the Meherrin, who spoke an Iroquoian language and had fought with the Tuscarora against the English, refused to accept. The descendants of the people who lived at Fort Christianna, and the Meherrin who did not, are among North Carolina’s tribes today. Their affiliation with the site reminds us that migration does not disrupt tribal identities, which are often built on stories about places that cross borders imposed by non-Indian interests. 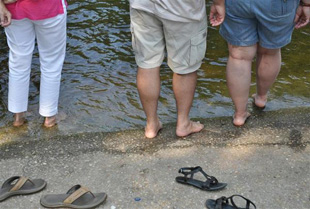 Cooling off in the Lumber River. Courtesy of Prof. Lowery.

A recently-constructed commemorative site at UNC-Chapel Hill signifies not just the past presence of Indians in the state but their continued vitality and importance to ongoing efforts to remember our collective past. In 2004, UNC dedicated a 240-by-40 foot monument to the state’s American Indians, designed by Haliwa-Saponi artist Senora Lynch. The monument, which is built into the brick walkway between the two student union buildings on campus, is called “The Gift.” It depicts an enormous turtle, bearing gifts including eagle feathers, corn, and land. According to Lynch, “We are given to live here on this Earth together.” The images Lynch used carry significance to North Carolina tribes’ oral traditions, but she intended them as reminders of how we must share our resources, not divide them up according to tribe, ethnicity, or other boundaries. The University has endorsed this message. Lynch’s “The Gift” demonstrates how American Indians are at the center of the state’s efforts to remember a past together, rather than apart.4