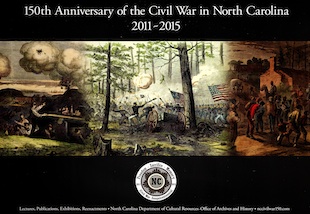 150th Anniversary of the Civil War in North Carolina, 2011-2015. Courtesy of North Carolina Department of Cultural Resources. Office of Archives and History.

Following President Barack Obama’s 2008 presidential election, New York Times columnist Thomas Friedman declared the American Civil War to have finally ended. While Friedman's statement was a bit hyperbolic, he was getting at a larger trend in the way the Civil War is remembered in American society. The year 2011 marked the 150th anniversary — the sesquicentennial — of the American Civil War. It also marks the passage of fifty years since the war's centennial, a massive event remembered both for the popular enthusiasm it elicited and as a flash point for the civil rights movement of the 1960s. These two anniversaries of the Civil War, separated by half a century, are vastly different in the way the Civil War has been commemorated. As a result of significant demographic changes in the country and progress towards racial equality, the Civil War Sesquicentennial marks a new era in how Americans remember and commemorate the Civil War.

One striking difference between the centennial and the sesquicentennial is the scale of the two commemorations. In North Carolina between 1961 and 1965, centennial observations included a litany of public events, displays, exhibits, dedications, and reenactments. The organization and coordination of these events was assigned to an independent sub-office, which was created in 1958 and received a one-time Congressional grant of $100,000 (equivalent to about $750,000 today) and an annual budget of $60,000 (or approximately $440,000 today).1 In contrast, the state legislature appropriated no dedicated funds for the sesquicentennial.2 State-funded historical organizations are organizing and conducting their sesquicentennial programs by redeploying their existing budgets and staffs. 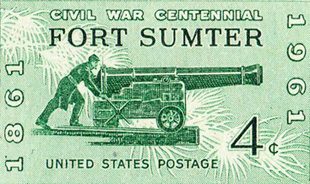 Another important difference between the centennial and the sesquicentennial is that the 100th anniversary of the Civil War became inextricably bound up in the contemporary struggle for civil rights and African American equality. The politics of race flared from the outset of the centennial. In 1961, for example, a national meeting of the state centennial commissions was to take place at the Frances Marion Hotel in Charleston, South Carolina, coinciding with the 100th anniversary of the attack on Fort Sumter. The event was to include a re-enactment of the attack with a fireworks display, providing an appropriate backdrop for the business of the assembly.3 The New Jersey delegation, which included Madaline Williams, an African American, contacted their hosts in Charleston to ensure that Williams would not be compelled to accept segregated facilities while in South Carolina. After increasingly tense negotiations between the event organizers and the New Jersey delegation, compromise failed and Mrs. Williams was informed that she would have to abide by the segregation of South Carolina.4 The New Jersey commission pulled out of the meeting and encouraged other states to do likewise. The resulting uproar snowballed, threatening to derail the centennial commemoration as a whole, even prompting officials from the newly sworn-in administration of President John F. Kennedy to try to defuse the situation.5 Inevitably, the coincidence of the centennial and the intensifying civil rights campaigns of the 1960s ensured that the political leaders and private citizens alike invoked the anniversary of the war in many of the controversies that flared between 1961 and 1965. As a result, the centennial, and the controversies surrounding it, were often front-page news, and few Americans were ambivalent, much less unaware of it. 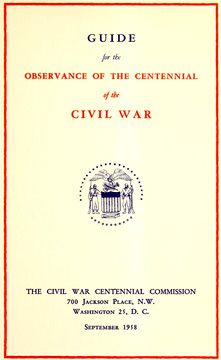 Guide for the Observance of the Centennial of the Civil War. Civil War Centennial Commission in Washington, D.C., 1958.

In the decades since the Centennial, the collective memory of the Civil War has undergone a marked change, a change that is conspicuous in the Civil War sesquicentennial. When Republican speaker of the Virginia House of Delegates William J. Howell opened a 2009 symposium on the Civil War in Richmond, he proposed that the 150th anniversary should focus on the "causes" and "enduring legacies" of the Civil War. Democratic Governor Tim Kaine seconded this sentiment, declaring that "this time the Civil War must be treated with analysis and commemoration."6 Fifty years earlier it would have been political suicide for any white Southern politician to so clearly throw off tradition in pursuit of a balanced and scholarly interpretation of the war. Then, white politicians in the South were exploiting the anniversary of the Civil War to harangue about the timeless verities of white supremacy and states' rights. But in 2009, in the former capitol of the Confederacy, no less, leaders from both parties agreed on the need for sober reflection and analysis when addressing Civil War enthusiasts.

The makeup of the 2009 symposium’s audience of Civil War enthusiasts also speaks to the evolution of Civil War commemoration since the centennial. According to historian David Blight, these enthusiasts encompass serious readers, collectors, re-enactors, battlefield preservationists and educators.7 However diverse and enthusiastic the group may be, they are a small sub-culture within the general population. Whereas the ceremonies of the Civil War centennial often drew large crowds and broad media attention, the audience for the sesquicentennial has largely shrunk to academics and enthusiasts.

The passage of time is partly responsible for the decline in popular interest in the sesquicentennial as compared to the centennial. During a recent sesquicentennial symposium, Dr. Charles F. Bryan, Jr., President of the Virginia Historical Society, recalled sitting in his living room as a child, listening to his grandfather regale him with stories about the Civil War and his family's role in it.8 He credits his grandfather's vivid stories and Civil War artifacts with inspiring his interest in history; without them, he speculates, he may have never pursued a career as a historian.9 Bryan, who was ten at the time of the centennial, is a member of the last generation of Americans with a personal connection to people who actually witnessed the Civil War. For Americans too young to share such a connection, the war has receded into the distant past and no longer possesses the visceral immediacy that it does for Bryan and that it did for earlier generations. 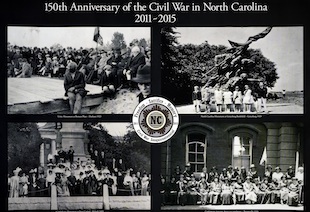 150th Anniversary of the Civil War in North Carolina, 2011-2015. Courtesy of North Carolina Department of Cultural Resources. Office of Archives and History.

The growth of immigrant populations and the movements of people within the United States also have contributed to the waning immediacy of the war. With each wave of immigration since the end of the Civil War, the portion of the nation's population that has any direct familial connection to the Civil War has shrunk. For these Americans, the Civil War is just one of many distant historical incidents that one may read about in a history primer; the Civil War, like the French Revolution or the English Civil War, happened long ago to other people. Simultaneously, during the past half-century, large numbers of non-Southerners have migrated to the South. Significantly, since 1970, more Africans Americans have moved into the South than have left the region, a reversal of more than a half-century of massive migration by African Americans out of the region. Many of these new migrants to the South are unversed in, ambivalent toward, or even hostile to the interpretation of the Civil War previously championed by white Southerners.

These far-reaching demographic trends have necessarily shaped how both the news media and state and local governments have made plans to commemorate the sesquicentennial. Michael Hill, Research Supervisor in the North Carolina Department of Archives and History and one of the planners of North Carolina's sesquicentennial program, observes that many of the state's immigrants have little or only a passing interest in the war and so have not asked public officials to undertake extensive ceremonies and activities to mark its anniversary.10 Planning for the sesquicentennial, in short, has had to take into account the nation's diversity and the myriad and contradictory attitudes about the Civil War even in the states of the former Confederacy. 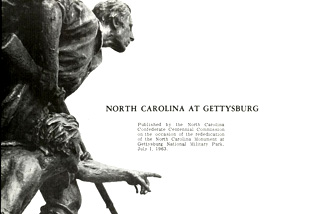 The sesquicentennial, furthermore, has garnered much less popular attention because it has not resonated with current events to the degree that the centennial did. Whereas the centennial overlapped with struggle to dismantle legal segregation, the sesquicentennial, as the columnist Tom Friedman suggested, is taking place in a substantially different political and racial environment. Although racial controversies periodically erupt, they are much less pronounced or searing than they were fifty years ago. Then, the 100th anniversary of Gettysburg coincided with the March on Washington for civil rights and economic justice and Martin Luther King's poignant plea for a nation free of the blight of racism. In contrast, overt racial politics have not been a factor in the sesquicentennial commemoration. Michael Hill of the North Carolina Department of Archives and History notes that an African American state representative did urge sesquicentennial planners to ensure that racial issues were not overlooked in the commemoration.11 Otherwise, to date, the sesquicentennial has passed virtually without controversy.

The sesquicentennial of the American Civil War marks a new phase in the way the conflict is remembered and commemorated. So great have been the demographic and social transformations in the nation that the war no longer is a source of controversy capable of engendering large and passionate crowds or requiring police to preserve order. Now the war is largely the preserve of buffs, re-enactors, and professional historians. The parades and public ceremonies of the centennial are now replaced by conferences and museum exhibits. The Civil War remains a defining moment in the nation's history, but in the twenty-first century the conflict occupies a very different place in our public life and culture than it did as recently as fifty years ago.

2. Potential caveats to this argument with regard to the recent economic recession beginning c. 2008 are dispelled by neighboring Virginia's appropriation of $1.5 million to Sesquicentennial efforts this year (2012). This higher figure even than present-day values for NC Centennial Commission funding can be attributed to the greater poignancy of the Civil War in Virginia state history.