Immediately after the victory of the Union army and the assassination of Abraham Lincoln in the spring of 1865, every city or town in the Union, it seemed, wanted to build a monument – to the martyred president or to the local soldiers who sacrificed their lives for the cause of the nation. Barely a year later, however, when the author William Dean Howells surveyed the commemorative scene, the frenzy had largely died down. Howells predicted that the soldier monument in particular would prove to be a passing fad. Americans, he wrote, were not at heart a military people; soon enough the nation would forget the martial aspect of the war and leave its exploits to the “ignorant poets” who sang the glories of battle. 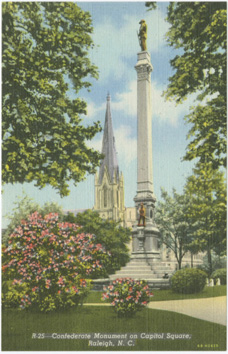 Howells’ forecast was conspicuously wrong. Common soldier monuments became almost ubiquitous, appearing in town squares and cemeteries across the country, not just in the North as well as the South. The spread of Confederate monuments especially confounded Unionist predictions. The celebrated Northern minister Henry Ward Beecher confidently asserted in 1863 that the soldiers of the Confederacy, no matter how brave they were, would lapse into oblivion, since their cause – the defense of slavery – was bound to become more and more odious to the nation. “Let their names and their mistakes be forgotten,” he declared. Of course exactly the opposite happened: while the war became a more distant memory, the rate of monument building actually increased. In North Carolina, as in the other Southern states, more Confederate soldier monuments arose in the early twentieth century than in the nineteen century, as the “Lost Cause” consolidated its hold on white Southern memory. Soldier monuments both North and South transformed the civic landscape and helped make the military a much more conspicuous institution in everyday life than it had ever been before. Howells’ and Beecher’s failure to see this coming is a warning to anyone trying to guess future trends in commemoration.

Howells believed that commemoration focusing on the idea of the war, rather than the warrior himself, would have more lasting value and appeal. For the most part, monument makers ignored his advice, even though he had a legitimate point. While soldier monuments became increasingly popular, they also contained within them the seeds of their own obsolescence. Even when they were brand new and their granite and bronze sparkled, art critics and other cultural elites complained that they were stiff, antiquated, meaningless. The veterans and their kin for the most part dismissed the criticism, but as this core constituency for the memorials died off, more and more citizens became critics. If they noticed the monuments at all, they saw them as hopelessly out of date and irrelevant. The backlash was so intense that it questioned the need for any public monument that didn’t have a utilitarian function. 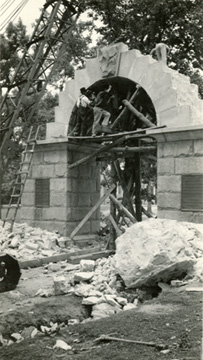 The fate of Civil War memorials demonstrates the illusoriness of permanence. It is unrealistic to assume that the monuments we are building today will be timeless. In practice, monuments are often ignored, neglected, or mistreated as they age. They are moved, removed, altered, sometimes even destroyed. Monuments are built for the future, to make sure that posterity never forgets, yet we always commemorate in the here and now, to suit our own present needs and agendas. In this paradox lies much of the complexity and uncertainty of commemoration.

In the past few decades, much of the cutting-edge thinking about commemoration has come from artists who work against the traditional notion of the monument as timeless and static. Maya Lin called her epochal design for the Vietnam Veterans Memorial an “antimonument” because it refused to celebrate the war or impose any message on its visitors; in the reflections created by its polished black granite walls, the memorial constantly changes with its audience. Other artists have gone a step further and invented “counter-monuments” designed to change and even disappear over time. Krzysztof Wodiczko is justly famous for his video projections on large memorial structures that reanimate old monuments with jarring contemporary narratives about war and trauma. Against the closed, mythically timeless world of the monument, these interventions make a virtue of timeliness, embracing the reality that a monument’s meaning must shift as the world around it changes. In this regard, Wodiczko’s projections are particularly inspiring, as they have evolved from clever reinterpretations of monumental rhetoric to more open-ended platforms for survivors of trauma to testify to their personal experience and challenge the pieties of triumphal commemoration.

All this activity points to one potential growth area for commemoration: ephemeral monuments, monuments that intentionally dispel the illusion of permanence. An oxymoron, you might say, but in that contradiction is one possible answer to the paradox of the monument. Ephemeral monuments embrace uncertainty. They work to relinquish control over how visitors choose to act and react. For these counter-monuments, temporary installations, and reinterpretations are all attempts to open up the space of the monument to new voices and democratic debate. They presuppose that monuments remain alive only as they encourage their audiences – now and in the future – to think, testify, and act. This may seem to be a radically new idea, but it has its roots in a long American tradition of skepticism about monuments in stone. As early as 1800, many were arguing that no “inanimate” monument to George Washington could ever hope to perpetuate his memory; one Congressman even proposed his own counter-monument: a “plain tablet, on which every man could write what his heart dictated.”

In this spirit of skepticism and counter-commemoration, we might consider selectively imposing moratoriums on particularly sacrosanct memorial spaces like the Mall in Washington, D.C., and inviting designers instead to experiment in these places with temporary monuments. The idea would be to create a more open, democratic sphere of public memory – an ongoing conversation rather than a quest for some kind of immutable “identity.” With no project locked into place for eternity, controversy would be much less threatening. Designers would be freer to embrace difference and pursue new perspectives. More voices would find room for expression. Inspired by rotating content, visitors to these memorial spaces might start to ask themselves what they would like to see represented there.

Even though the idea of ephemeral monuments has gained more traction in recent years, we are hardly likely to see the end of the traditional public monument. Indeed, the pressure to build permanent monuments shows little sign of abating. Monument building in the last 150 years has continually expanded the boundaries of commemoration. As war memorials in the nineteenth century began to encompass not only great commanders but ordinary soldiers, monuments proliferated both in number and in geographical sweep. In the past few decades another shift has been occurring: the commemoration of traumas other than wars and their victims. We take it for granted, for example, that the victims of September 11 deserve their own public memorial, but in the heyday of the hero monument, this impulse to commemorate victims would have been met with incomprehension. Inevitably, this shift has created a dynamic in which tragedies must compete with one another to make their trauma reach a threshold of memorability. 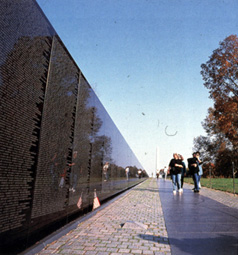 Along with this turn to the victim is a shift in the mode of commemoration. Traditionally monuments were objects to revere. They held up leaders and warriors as great examples to inspire patriotism in new generations. Since the early twentieth century, monuments have increasingly become psychological spaces in which visitors are supposed to have intense emotional experiences. This shift has put more pressure on creators of monuments to personalize events, and particularly tragic events, by displaying the faces and life stories of the dead. The practice of naming the dead on walls or tablets continues, but increasingly this practice is treated as insufficient in itself. Maya Lin’s Vietnam Veterans Memorial (1982) in effect culminated the cult of the name. More and more memorials now have added museums too, in order to make room for the faces and stories that are meant to give the abstract name an engaging visual narrative. The decision at the World Trade Center site to create an aboveground memorial and a museum below is the most dramatic example, but many other similar hybrids have been recently completed or planned. The Vietnam Veterans Memorial Fund is hoping to build a huge underground “visitors center” near Lin’s monument that will hold, among other things, an archive of photographs of all 58,000 men listed on her walls.

In theory, these annexed museums and visitor centers could take on some of the virtues of ephemeral commemoration, for the simple reason that museum content is not “set in stone.” Curators can change the content and even the mission of a museum far more easily than the stewards of monuments in stone and metal can do. To date, it does not seem that most memorial museums are seizing the opportunity, but of course time will tell.

One way that it might happen would be to encourage innovative partnerships between memorial museums. It would be fascinating, for example, to see what could come of a collaboration between Greensboro’s International Civil Rights Center and Museum and a commemorative institution dealing with apartheid in South Africa. Even more complicated would be a collaboration with a Civil War museum or monument, such as Richmond’s Museum of the Confederacy. The dominance of the Lost Cause in mainstream Southern memory was, after all, a linchpin of the Jim Crow system that the Greensboro sit-in aimed to defeat. To bring such institutions together – in transnational or transhistorical juxtapositions – would inevitably put pressure on each to expand its focus and make new connections with other stories, other tragedies. This is a new direction that has not yet been taken. The obstacles to it are obvious, but even an attempt to make it happen would probably force us to realize that our own triumphs and tragedies are not so exceptional when viewed across the larger spectrum of global history. If we stepped outside the limited perspectives of our own group or nation, we might find new “chords of memory” – to use Lincoln’s phrase – that bind us to others, even to our antagonists.