Monuments and the Spaces They Occupy 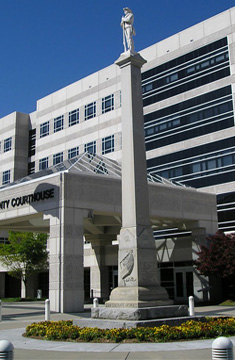 Choosing the location of a monument has always been a carefully calculated decision. Sponsors usually choose public spaces that bolster the significance of a monument or complement the monument's symbolic and aesthetic qualities. They usually cannot, however, foresee or control the evolution of a public space where a monument stands. Subsequent transformation of the space surrounding a monument can alter, sometimes profoundly, how the monument is perceived. The meaning of a monument also can change through the less tangible cultural transformation of the surrounding space. Various monuments in North Carolina illustrate this complicated relationship between monuments and the spaces they occupy.

Some monuments have been uprooted from their original locations and transplanted to entirely new spaces. The relocation of some monuments aroused little if any controversy. For example, the Gaston County Confederate Monument in Gastonia originally stood, facing north, in front of the county courthouse on South Street. In 1998, when a new courthouse opened several blocks away, the monument was moved with little fanfare and no controversy (although it now faces east).

In other cases, changes in location elicited protest from supporters who complained that moving monuments — especially to less esteemed spaces — not only diminished the monuments but also interfered with the public's ability to commemorate the subject or cause that the monument honors. Recently, the relocation of Confederate monuments has been a frequent flashpoint for such controversies. Debates rage over the contemporary implications of Confederate monuments and whether they ought to be erected or displayed in public spaces when some residents are offended by their presence. Monuments damaged either by inevitable deterioration or by misfortune have periodically provided communities with opportunities to reconsider their locations. 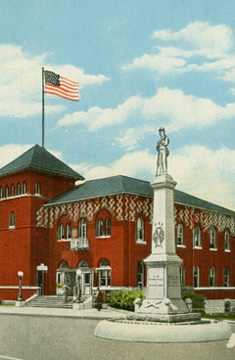 A recent controversy about the location of a longstanding Confederate Soldier monument in Reidsville illustrates how the transformation of both physical space and cultural values can alter how a monument is understood. For over 100 years, the Confederate Soldier Monument stood in a traffic circle at the intersection of Scales and West Morehead Streets just a block away from the city's town hall in the heart of downtown Reidsville (Sanborn Fire Insurance Maps of Reidsville, N.C., 1914. Page 6). In May 2011, a wayward driver hit and toppled the monument. Although some residents of Reidsville insisted the monument should be restored where it had stood, others argued that a Confederate monument was antiquated at best and that it was no longer appropriate to occupy such an important public space. When the United Daughters of the Confederacy (UDC), the original sponsors and owners of the monument, proposed repairing but removing the monument to nearby Greenview Cemetery, a ruckus ensued.1 The Sons of Confederate Veterans, a traditional ally of the UDC, opposed the move, complaining that relocating the monument to a cemetery on the edge of town would severely diminish the visibility of the monument as well as the cause that it commemorated.2 Although the UDC agreed to rebuild the monument, as of May 2013, no compromise on the location of the monument has been reached, so it remains in pieces in Reidsville's public works yard.

Predictably, guardians of monuments are anxious to prevent what they see as the degradation of the surrounding environment, whether through urban decay, commercial development, or neglect. For example, plans to erect a Bojangles restaurant near the Patriots of the Viet Nam War Monument in Carthage, North Carolina, provoked consternation among local veterans. They complained that locating a busy commercial establishment next to a place of remembrance and reflection was disrespectful and insensitive. Veteran Ronnie Comer explained, "I'm not against Bojangles, I'm against where it's going to be put. I don't want to be sitting there, thinking about my father, and hear 'May I take your order?' It's like putting a Bojangles in the middle of a graveyard."3 For Comer and like-minded defenders of the site, the memorial to wartime sacrifice is sacred space. But for local officials who approved the location of the restaurant and for the businessmen intent on opening a franchise, the empty plot of land represents an opportunity to make profit, expand the tax base, and bolster the community's economy. For them, present-day needs and circumstances supersede the commemoration of the past. 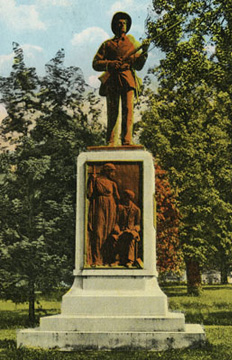 The consequences of physical changes to the landscape on commemorative works are especially conspicuous on the University of North Carolina's campus. The university, which is one of the densest sites of commemoration in the state, has been transformed enormously during the two centuries that it has existed (see Chapel Hill Campus Virtual Tour). Some of the changes reflect inevitable environmental transformation – trees have grown and died, dirt paths have become paved sidewalks and dirt lanes have given way to modern streets. Other changes are a consequence of profound cultural changes that previous generations almost certainly could not have anticipated.

Arguably, no monument more vividly illustrates manifold changes brought about by later additions to a monument's surroundings than UNC's Memorial to Civil War Soldiers of the University, known to most students as "Silent Sam," which stands at the front of the northern entrance of the campus. The North Carolina Division of the United Daughters of the Confederacy commissioned the monument in 1913 to honor all University of North Carolina at Chapel Hill alumni who fought for the Confederate States of America. Located within view of Franklin Street, the major thoroughfare that served then and now as a major axis of the town, the monument was a testament to the ideals that the university's faculty, students, and alumni professed when it was erected. In his 1913 speech given at the dedication of the monument, industrialist, Confederate veteran, and UNC alumnus Julian S. Carr celebrated the contributions of both the university and North Carolina, speculating that had the other Southern states fought as hard as North Carolinians did, the Confederacy would have won its independence. What distinguished Carr's speech from a typical dedication day address for a Confederate monument was his honesty about the relationship between the monument, Reconstruction, and white supremacy: The present generation, I am persuaded, scarcely takes note of what the Confederate soldier meant to the welfare of the Anglo Saxon race during the four years immediately succeeding the war, when the facts are, their courage and steadfastness saved the very life of the Anglo Saxon race in the South — when the 'bottom rail was on top' all over the Southern states — and to-day, as a consequence, the purist strain of the Anglo Saxon is to be found in the 13 Southern States — Praise God.4

For Carr, "Silent Sam" testified to the enduring necessity of white supremacy. Carr acknowledged no doubts about the Confederacy's righteousness nor the virtue of white supremacy and even boasted of his part in subduing African Americans after the war. He proudly recounted to the gathered audience: One hundred yards from where we stand, less than ninety days perhaps after my return from Appomattox, I horse-whipped a negro wench, until her skirts hung in shreds, because upon the streets of this quiet village she had publicly insulted and maligned a Southern lady, and then rushed for protection to these University buildings where was stationed 100 Federal soldiers. I performed the pleasing duty in the immediate presence of the entire garrison, and for thirty nights afterwards slept with double-barreled shotgun under my head.5 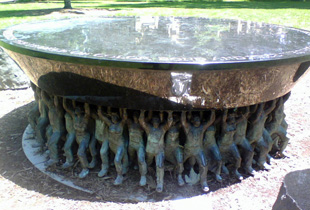 Carr presumed that the statue would motivate the graduating students who were at the ceremonies to fulfill their duty to their race. In the century since Carr delivered his dedication speech for the Confederate monument, the campus upon which "Silent Sam" stands has been transformed in ways that Carr never anticipated and would not approve of. Desegregation and the rejection of a white supremacist ideology by the University were unthinkable to the former Confederate in 1913. Reinterpreted by each successive generation of students since its unveiling, Silent Sam now carries a multitude of meanings unanticipated by the monument's creators.6

One of the reasons the monument's meaning has become increasingly complicated is that the actual commemorative landscape surrounding the statue has been changed in direct response to it. The most conspicuous modification was the addition of the Unsung Founders Memorial in 2005. Located within 100 yards of "Silent Sam," the monument evokes a very different and directly oppositional memory. The Unsung Founders Memorial consists of a stone table with small sculptures of slaves holding the table top above their heads. The inscription on the monument reads, "THE CLASS OF 2002 HONORS THE UNIVERSITY'S UNSUNG FOUNDERS — THE PEOPLE OF COLOR BOUND AND FREE — WHO HELPED BUILD THE CAROLINA THAT WE CHERISH TODAY." 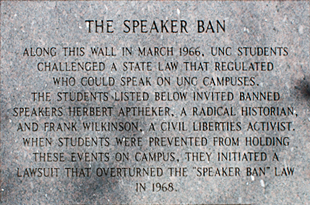 Although the Unsung Founders memorial was not designed as a riposte to "Silent Sam," its proximity to the Confederate memorial ensures that the two monuments are forced into conversation with each other. While dedicating the monument, University Chancellor James Moeser underscored how the memorial represented a repudiation of the worldview of Julian Carr and like-minded contemporaries: "What we do today will not rectify what our ancestors did in the past. But this memorial, I believe, attests to our commitment to shed light on the darker corners of our history. Yes, the University's first leaders were slaveholders. It is also true that the contributions of African American servants and slaves were crucial to its success."7 By placing the Unsung Founders memorial in the same quad as "Silent Sam," Moeser believed the university was making manifest a profound transformation in its values and culture. Provost Bernadette Gray-Little, in her speech at the dedication, concurred: "It will help to make us and everyone who comes after us, aware and thankful to those who did some of the heaviest lifting, offered the bravest kind of service, and contributed some of the finest physical details to our University."8

The landscape around "Silent Sam" continues to evolve. Recently, a commemorative marker was erected at the site of a 1963 campus challenge to the Speaker Ban Law, which prohibited Communists from speaking on state university campuses.9 As the saga of "Silent Sam" suggests, the space surrounding and the meanings attached to monuments can undergo profound change that leads different generations to ascribe new meaning to the monuments.