Most African-American monuments in the South were created after 1970. After first focusing on the civil rights movement of the 1950s and 1960s, monument builders moved on to celebrate the centuries-long black freedom struggle more comprehensively. These new monuments were added to an already densely populated memorial landscape – one dominated by, but not restricted to, Confederate memorials – so their builders have been forced to articulate their goals in response to their predecessors’. To reach a broad public and to respond to the earlier monuments, designers of African-American memorials have a strong incentive to rely on the traditional visual language of Euro-American monument building. 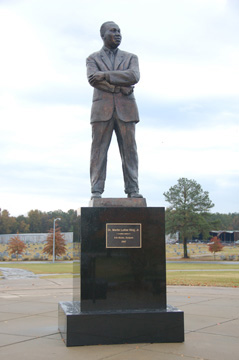 The earliest civil rights memorials tended to adopt this familiar vocabulary almost reflexively. They celebrated great leaders – always men and usually Martin Luther King, Jr. – and they used the conventions of traditional portrait statuary to do so. It is easy to understand why this happened. Monuments must stand on their own. They are metaphorical objects – symbols of intangible values or higher realities – even when they are presented as simple visual records of a person or event. We are meant to see in a statue of Martin Luther King, Jr., not only how he looked physically, but who he was in some deeper sense. This is a source of monuments’ power as well as the occasion for some of the bitter controversies that often surround them, for departures from conventional expectations can provoke virulent reactions. Monument builders cannot always assume that their audiences will see the same things in a visual image that they do. In Rocky Mount, sculptor Erik Blome depicted Dr. King (2001-3; removed 2004; reinstalled 2007) in a pose derived from a familiar photograph that caught the leader standing behind his desk, arms crossed, pen in hand, as though he had just risen from his work to greet a visitor. But the crossed-arms pose was interpreted by some black Rocky Mount residents as “arrogant.” The same model was chosen for the new King Memorial in Washington, D.C., and provoked the same response from the mostly white arts review board, which demanded that the image be softened. Yet the same photograph inspired a third monument (Paul di Pasquale, 2002-4) in Hopewell, Virginia, without arousing any opposition. 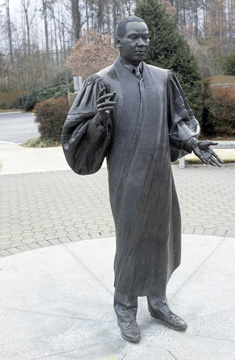 The traditional Euro-American visual language of monuments is useful for representing exceptional people – kings, generals, presidents – and dramatic events such as battles. As our understanding of the civil rights movement deepens, however, traditional great-leader monuments seem less appropriate. Some memorials to Dr. King respond by humanizing him, moving him out of the heroic realm of traditional statuary. One of the most successful stands in the King Memorial Gardens, Raleigh, where sculptor Abbe Godwin’s King (1989-91) placed her figure directly on the ground rather than lifting him on a pedestal out of viewers’ reach. This was a requirement of the memorial’s patrons, “primarily so that small children and the physically challenged as well as all citizens could touch and ‘connect’ with the art work,” said principal organizer Bruce Lightner. King’s doctoral robes, which seem to be twisted around his legs by the passing traffic on the adjacent road, represent contemplative, humane, human accomplishments rather than heroic or violent deeds. His preacher’s gestures strikingly recall the Buddhist mudras (hand positions) for peace, charity, and dispelling fear. The sum of these qualities seems to me to celebrate an exemplary citizenship to which any viewer might aspire, as opposed to the unattainably superhuman qualities with which traditional civic monuments often invest their subjects. It is not surprising that visitors to the King Memorial Gardens tend to stand much closer to the statue than they do to more traditional monumental demi-gods, and to treat it as though it King himself were present.

Just as the great-man monument fits uncomfortably with civil-rights commemoration, so the dramatic events that Euro-American monuments often celebrate and for which the traditional visual language was developed are difficult to find in a movement that was centered first of all around restructuring everyday life and ordinary landscapes. We increasingly understand that in most places, for most of the time, the civil rights struggle was a social movement carried out through mundane, repetitive events such as voter registration, school teaching, and the refusal to observe the everyday protocols of segregation. These are the kinds of activities that were carried on long before and long after the dramatic, nationally reported events of the mid-1950s to the late 1960s. They involved women at least as often as men. Many monument designers revert to battle monuments for their models, but these seem particularly inappropriate. 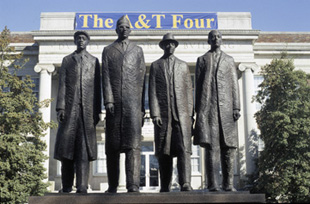 February One (James Barnhill, 2002), on the campus of North Carolina A&T University in Greensboro, is an interesting attempt to meld the heroicism of traditional monuments with the democratic nature of the black freedom struggle. The monument honors four A&T students who initiated the sit-ins at the Greensboro Woolworth’s on February 1, 1960. The men are larger-than-life figures on a pedestal, in the heroic mode, but they are shown in informal, active poses, rather than in the stiff formal posture of traditional monuments, and they are dressed in everyday clothes. None of the figures appears to be more prominent than any other, thus suggesting that as a group they represent ordinary African-Americans who undertook an extraordinary act. 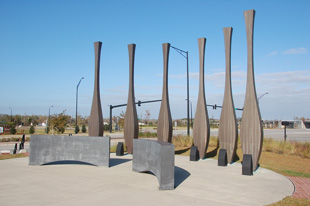 While the construction of civil rights memorials goes on apace, some of the most ambitious efforts of recent years recall the longer-term struggle of which the movement of the 1950s and 1960s was a part. At Wilmington, North Carolina, the 1898 Memorial (Ayokunle Odeleye, Marianne Weinberg Benson/John Benson and Associates, 2008) was erected in recognition of a coup d’état in which prominent white citizens of the city organized to seize the city government from its biracial, legally elected officers, in the process murdering or banishing many black citizens. The memorial consists of an arc of six elongated, freestanding paddles fronted by a low, curved wall. A plaque explains that the paddles refer to the role of water in “the spiritual belief system of people from the African continent.” There seems to be a disconnection between the events and their commemoration. Many of the black Wilmingtonians who suffered in 1898 were targeted because they had achieved political and economic success in post-Civil War Wilmington, yet they are represented here by an essentialized Africanness that is eerily similar to the stereotyped portrayals of blacks that were used to justify the riot. A visitor must read a lengthy text inscribed in small type on the top edge of the wall to understand the historical event. So while the Wilmington monument escapes the traditional Euro-American monumental vocabulary, its creators seem to have settled for a kind of cultural stereotype rather than confronting the difficult task of commenting metaphorically on the events of 1898. 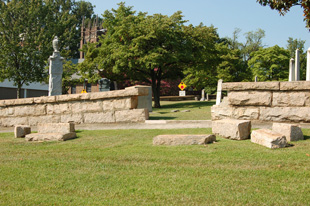 At Salisbury, the Oak Grove-Freedman’s Cemetery Memorial (Jerome Meadows, Maggie Smith, Sam Reynolds/Reynolds and Jewell Landscape Architects, 2003-6) examines the relationship of blacks to whites in the post-Civil War era. Old English Cemetery, the burial place of generations of the city’s white worthies, stands next to an open lot that was until recently unacknowledged as a burial place for the town’s freedmen. The contrast between the proud monuments of the white cemetery and the unmarked graves of the black one could not be more stark. As though to emphasize the difference, a thick stone wall separated the two. The brilliantly simple memorial consists of a breach in the wall. Stone blocks removed from the opening are scattered across the lawn of the Freedman’s Cemetery as though someone had burst through the wall. The gesture implies both a breaking of barriers and a sense that Southerners of all races share a common history that must be remembered as a whole. As such it can stand for the rapidly evolving re-imagination of the South’s past that is emerging from what began as an attempt to commemorate one part of it and from grappling with was to express in succinct visual images the complexity of the African-American experience.