"Nothing captures the mystery and romance of the sea like a fog-shrouded lighthouse" (The Virginian-Pilot).1

For years, lighthouses protected sailors from the rocky shoals of the North Carolina coast. Now, although no longer needed for their original maritime purpose, they have become romantic symbols of the history of the Outer Banks. 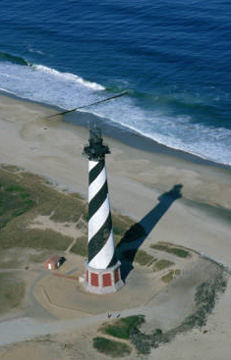 When North Carolina's lighthouses were first erected, few contemporaries could have imagined that they would become some of the most famous symbols of the state. Their original purpose was strictly utilitarian, but now they are among the most familiar landmarks in the state and attract tens of thousands of sightseers a year. Moreover, they are shrouded in romance and have inspired songs, poems, and visual art. It is worth pausing to consider how these structures acquired this new meaning and importance. After all, many utilitarian structures, such as outdated airport terminals, shopping malls, or warehouses, are razed or abandoned and never acquire any romantic associations. So how and when did lighthouses undergo the transformations from isolated maritime beacons to tourist attractions and state symbols?

CAPE HATTERAS LIGHTHOUSE. The first lighthouse at what is now the Cape Hatteras Seashore was built in 1803 and later renovated in 1845. The lighthouse did not live up to structural or functional expectations, and was considered a "disgrace." The original lighthouse was replaced by the current lighthouse in 1870, where it originally stood 1,500 feet from the shore, though this measurement would prove to be short-lived. The Diamond Shoals where the lighthouse stood were, and still are, eroding quickly. Efforts to inhibit erosion on the shoals began as early as 1930, and included building artificial dunes, installing groins near the lighthouse, adding more sand to the beach, and planting sea grass. As of 1998, the lighthouse was drawing over 250,000 visitors annually but stood precariously close to the waterline. State officials and the National Academy of Sciences concluded that the erosion seriously threatened the lighthouse and the decision was made to move it in order to save it. 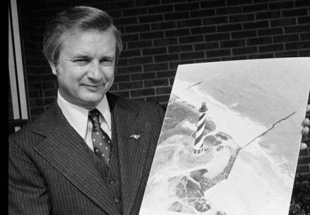 The decision to move the Cape Hatteras Lighthouse was hotly debated. Opponents of the move expressed concerns over cost, its possible impact on the site’s tourist appeal, and potential damage to the monument. The cost of moving the lighthouse was estimated to be $12 million, and many opponents insisted that the move was not worth the price if relocation was only a temporary fix — the beach was eroding at a rate of approximately 10 feet per year, and they worried that the light would need to be moved again in the future. Many opponents also contended that moving the lighthouse would "ruin the character of the historic site and North Carolina’s hottest tourist draw."2 Would people still come to see a lighthouse that wasn’t immediately on the shoreline? Additionally, many opponents warned that it would not be possible to move the lighthouse without damaging the mammoth structure. For these reasons, even the "Save the Cape Hatteras Lighthouse Committee" was opposed to the relocation. 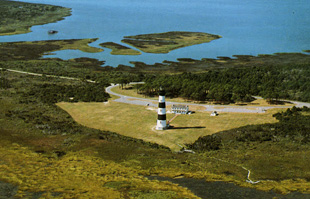 BODIE ISLAND LIGHTHOUSE. The Bodie Island Lighthouse that stands on Bodie Island today is the third on the site. The first lighthouse there was built in 1848, and stood only 56 feet tall. Beset with technical and structural problems, it was soon torn down replaced with an 80-feet high successor that was completed during the Civil War. This too was short-lived; Confederates destroyed it so as to prevent Union forces from capturing and using it to facilitate naval operations and troop movements. In 1872, the third and final lighthouse that towers 150 feet above Bodie Island today was erected.

Currently, the Bodie Island Lighthouse is undergoing renovation, which is scheduled to be finished in 2013. Funded by the National Park Service, these much-needed renovations have addressed serious structural defects that were exposed during a previous renovation project in 2011 but were too costly for the renovation budget that had been originally allocated.

CURRITUCK LIGHTHOUSE. Finished on December 1, 1875, the Currituck Lighthouse was that last major lighthouse to be built on the Outer Banks (along with the Keepers House completed in 1876 to go along with it). The physical appearance of this 158-foot lighthouse is different than that of the other lighthouses on the North Carolina coast because the brick was never painted, remaining red throughout the years. In 1991, Currituck was opened to the public and today, overlooking to Currituck Sound, is a popular tourist destination, complete with a museums and gift shop. 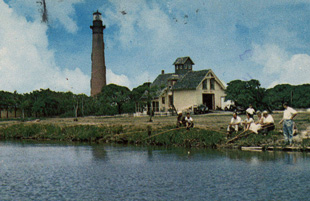 The Currituck Lighthouse is still standing today thanks to organizations that are dedicated to preserving and protecting the lighthouse. "The nonprofit Outer Banks Conservationists (OBC) was created to preserve the light station when no one else was willing to step in and restore the national landmark. Since then, the OBC has spent more than three decades and nearly $1.5 million from private funding restoring, maintaining and operating the lighthouse. OBC receives no government funds."4

The Currituck Lighthouse was the center of controversy in 2004 when Currituck County and the OBC submitted competing bids for the deed to the tower. The lighthouse was formerly owned by the Coast Guard. While the OBC won the deed from the federal government, the county attached many strings concerning compliance with zoning rules and government audits. However, no specific zoning violations were cited in the initial warnings, and the OBC questioned the validity of the warnings since the lighthouse had only changed ownership and not land use. Today, the Lighthouse deed is still held by the OBC. It isn’t clear as to why the county wanted the deed to the site, but it is known that the OBC fought for the deed because the organization was the one that restored the lighthouse and worked for it, therefore they felt as though they deserved it and were the ones that would best preserve it.

The Evolution of Lighthouses and Outer Banks Tourism 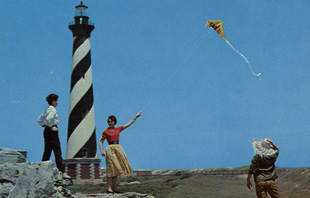 Interest in the beauty, architecture, and history of North Carolina lighthouses is a recent development, starting in the mid-twentieth century. Previously, and especially before the 1930s, it took a monumental effort to travel out to North Carolina's barrier islands. One author noted that before the construction of the modern roads, ferries, and bridges beginning during the late 1940s, five modes of transportation, many of them inconvenient, were required to reach the Outer Banks.5 Consequently, the Outer Banks, and the lighthouses there, were virtually undeveloped and little appreciated. Furthermore, the lighthouses still were used by various mariners — it wasn't until after World War II that advances in marine navigation rendered these structures irrelevant. Because the lighthouses were not established as parks or museums, and because they still served a utilitarian function few attached much historic value to them.

The development of tourism on the Outer Banks accelerated in 1937 when US Congress passed an act establishing Cape Hatteras National Seashore, the nation's first seashore park.6 A decade later, the first black-top roadway on the Outer Banks was completed, stretching 17 miles between Hatteras and Avon.7 By 1957, Ford Times magazine was promoting the Outer Banks as a "new seashore vacationland. " Throughout these early years of development (and persisting to the present day), travel literature emphasized the seclusion and natural beauty of the barrier islands. Nevertheless, continuing improvements in infrastructure have made the Outer Banks more accessible and the area is now a well-developed tourist destination. By the 1980s, the entire string of islands, from Corolla to Ocracoke, were both easily accessible to and heavily visited by tourists. The typical traveler to the barrier islands are families, older couples, and others intent who seek out seclusion with the intent of relaxing on tranquil beaches away from the hustle and bustle of popular beach resorts elsewhere along the South Atlantic coast. For these visitors, museums, natural parks, and lighthouses offer low-key entertainment to complement their time on the shore. 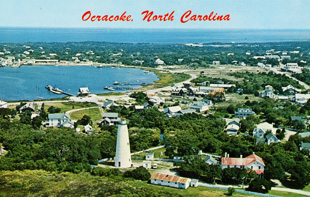 The evolution of the cultural meanings attached to the lighthouses can be traced in state and Outer Banks travel guides published between the 1930s and the present day. In the earliest guides, lighthouses were not prominently featured at all. Even as late as 1957, the Ford Times included no pictures of lighthouses but featured photographs and discussions of museums on the Outer Banks. Another guide, The Lost Colony: Outer Banks Guidebook and Vacation Diary, referred to the Cape Hatteras lighthouse only in relation to its proximity to the nearby Museum of the Sea.8 The lighthouses apparently did not merit the tourists' attention.

With the accelerating development of the Outer Banks during the 1960s, lighthouses became must-see tourist attractions. Now tourism promoters touted the lighthouses as "historical highlights and natural wonders" that visitors could not easily ignore.9 Once the lighthouses were opened to visitors, they offered an ideal vantage point from which to appreciate the natural beauty of the islands and the ocean.10 Furthermore, they were now acclaimed as a "picture of stability" amongst the windblown shores, sandy dunes, wind bent trees, and rustling grasses of the continuously changing barrier islands.1 Presented in this manner, the lighthouses represented a captivating contrast between the natural beauty of the beaches and the enduring inventions of humankind. 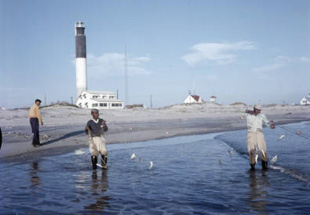 Tourist guides also began to dwell on the historic significance of the lighthouses of the Outer Banks. Known as the "graveyard of the Atlantic, " the waters surrounding the Outer Banks are notorious in maritime lore for their dangers. One commentator has described the dense clusters of wrecks included on maps of the Atlantic waters off the Outer Banks as looking "like the plan of a grand sized cemetery." Tourism booklets dwell on this history by noting that while walking on the shores visitors catch glimpses of, or even walk across, remnants from shipwrecks of old wooden ships. The flashing lights of the still operational lighthouses remind visitors of this history — that sailors relied on these lighthouses to avoid harm while sailing the dangerous shores of the barrier islands. Tourists can also visit the museums affiliated with the lighthouses, where historical information on the different light keepers, maritime history, and operational history is displayed. While visiting these lighthouses, then, tourists are reminded of the role that lighthouses played in the history of maritime navigation and of times when ships had no GPS, were powered by wind, and when they were made of wood and not iron. The lighthouses serve as prompts for visitors to recall earlier times and the colorful role that these utilitarian structures played in them.

I have witnessed the interest in lighthouses myself. Not only has my family insisted on driving for hours up and down the roads of the Outer Banks to visit all the lighthouses and climb up them, but also my parents are avid collectors of lighthouse memorabilia. Gift shops, and not just those attached to the lighthouses, all carry lighthouse related items, from postcards and posters to miniature replicas, Christmas ornaments, and t-shirts. Where lighthouses once were hardly noticed because of their strictly utilitarian purpose, they are now a destination in themselves and the best-known symbols of the Outer Banks.