The Civil War Experience in Gaston and Cleveland Counties 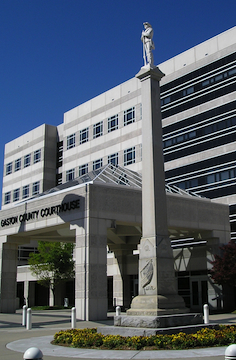 Gastonia, small city of about seventy thousand residents on the southern border of the North Carolina Piedmont, grew up with and around the cotton mill industry. In the early twentieth century, it boasted the largest number of cotton mill spindles in the world. The textile mills have since left, and the city has been drawn into the economic orbit of Charlotte, which lies 20 miles east. Gastonia nevertheless remains at the center of the county's civic life because it is the site of the Gaston County Courthouse, an impressive and modern four-story edifice completed in 1998. In front of the courthouse stands a granite pillar, adorned with a slightly larger than life sculpture of a stoic Confederate soldier, grasping his rifle and looking northward. Even a casual observer can discern the singular importance of the towering sentinel, seemingly standing guard even as Gaston County moves further into the 21st century. The prominent location of Gastonia's Confederate monument speaks to the continuing importance of the Civil War experience in Gaston and neighboring Cleveland counties. By tracing the Confederate experience and subsequent commemoration of the Confederacy in Gaston and Cleveland counties, we get a fuller understanding of how communities in the South, each with their unique history, participated first in a region-wide effort to fashion a nation and then in a region-wide and decades-long campaign to commemorate their failed experiment in nation-building.

In 1860, Gaston and Cleveland counties, seemingly were unlikely hotbeds of secessionism. North Carolina, unlike states in the Deep South, was not swept up by the secession frenzy that flared after the election of President Abraham Lincoln. In fact, a large proportion of North Carolinians remained pro-Union as late as 1861, rendering the state so divided over secession that the state legislature determined that the state's voters should weigh in on the matter through a referendum in February 1861. Yet even the referendum underscored the caution of North Carolina legislators; voters cast referendum ballots not for or against secession, but rather for or against holding a statewide convention to consider secession. When voters narrowly rejected the convention they made manifest their reluctance to withdraw from the Union.

Voters in Gaston and Cleveland counties voted heavily in favor of the convention in hopes that it would endorse secession. Already, in November 1860 and three months before the referendum, Cleveland County hosted one of the first secession rallies in the state. Perhaps the only surprise about the referendum vote in the county was the near-unanimity of support for a convention; nearly 92% of voters in the county favored it. The level of support for the convention was nearly as high in Gaston County, where 84% of voters favored it.

What explains the exceptionally high level of support for a convention and secession in these two counties? Neither Cleveland nor Gaston County was home to large slave plantations that were characteristic of counties in the eastern coastal plain of the state, where support for secession was also high. Slaves accounted for only 18% of Gaston County's population in 1860; only 360 of the 9,307 white residents of the county owned slaves. Of those slaveholders, only 33 owned as many as ten slaves, and only one owned as many as 40. Slaveholdings represented an even smaller proportion of the population in neighboring Cleveland County. There they made up around 17% of the county's population, and only 383 of the county's 12,348 whites owned slaves. White support for secession in these two counties, then, cannot be wholly explained by their extensive investment in slave property.

But nor should we underestimate the importance of slavery in Gaston and Cleveland counties just because large slave plantations were not prevalent there. White men there still aspired to own slaves. Most whites knew or were related to somebody who had slaves. And whites who did not own slaves understood the economic benefits that slave ownership conferred. Contemporaries could not fail to grasp that the wealthiest residents in the two counties were those who also owned the largest numbers of slaves. Finally, extensive trade connections with neighboring South Carolina, where secession and the defense of the institution of slavery enjoyed overwhelming support, almost certainly fostered support for secession in Gaston, Cleveland, and other border counties. For these reasons, white residents of Gaston and Cleveland counties concluded there were immediate and compelling reasons to leave the Union in 1860.

When North Carolina finally seceded in May 1861, after President Lincoln called for troops to suppress rebellion in South Carolina and elsewhere, whites in Gaston and Cleveland counties quickly transferred their allegiance to the Confederacy and rushed to join the ranks of its military. Gaston County furnished around 1,500 troops; Cleveland County 2,035 soldiers. In both counties, the proportion of white men who served in the Confederate military totaled almost half of the entire white male population, and an even larger percentage of the white male population of military age. After the war, Cleveland County residents would boast that no county in the state had enlisted as large a percentage of its military age population as their county had. 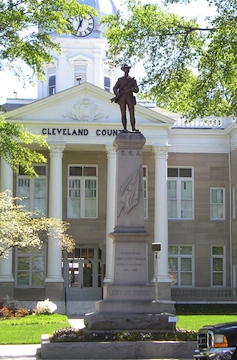 After having committed so much manpower and so many resources to the Confederate cause, white residents of Gaston and Cleveland counties must have found their eventual defeat a crushing and bitter blow. Although difficult to determine with precision, the human and economic cost of their participation in the war undoubtedly was painfully high. If soldiers from Gaston and Cleveland counties suffered losses comparable to those in the Army of Northern Virginia, of the 3000-odd men who went to war from the two counties, perhaps 24% died in battle or of disease, 28% were wounded at least once, 27% were captured, and probably fewer than 33% escaped the war physically unscathed. One measure of the economic dislocation that followed the Civil War was the marked decline in land values, which now became the most important measure of wealth in the South after the abolition of slavery. The value of all farms in Gaston County in 1860 had been nearly $1.4 million; a decade later that total plummeted to $680,000.

Despite the lingering scars of the war and its aftereffects on the bodies of veterans, on the counties' landscapes, and in the psyche of the white residents, many whites in Gaston and Cleveland counties maintained their allegiance to the former Confederacy. Indeed, even as economic changes transformed the two counties at the close of the nineteenth century, the Confederate experience remained at the very center of the identity of many whites. It apparently was formative to the very active chapters of the Ku Klux Klan that operated in two counties between 1868 and 1872. By one estimate, three-quarters of Klansmen there were Confederate veterans. Perhaps even more telling was the erection of the Confederate memorial in Shelby, North Carolina, in April 1906. Shelby, the county seat of Cleveland County, remained little more than "just a wide place in the road" until the late nineteenth century, when a combination of nascent industrialization and the rise of a powerful local political clique began to raise the profile of the community. Like whites in many other Southern towns intent on demonstrating both their reverence for the Confederacy and their civic zeal, white residents of Shelby launched a campaign to erect a Confederate memorial. And like their counterparts in many Southern communities, they located the monument at the center of the town directly in front of the county courthouse. But the courthouse square in Shelby had an additional symbolic significance that virtually all white residents must have understood; it had been there that Federal troops had occupied when they entered Shelby in 1865 and had remained until 1872 while attempting to suppress the local Ku Klux Klan. With the dedication of the Confederate monument on those same grounds in 1906, whites in Shelby permanently reclaimed the space in the name of the Confederacy. 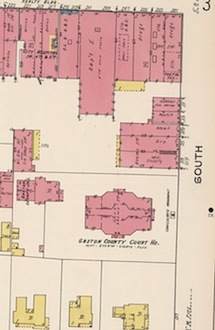 1922 Sanborn Fire Insurance Map of Gastonia, N.C., shows where the monument stood before it was moved in front of the new courthouse. University of North Carolina at Chapel Hill Library.

Six years later, whites in Gaston County dedicated their Confederate monument in Gastonia. Unveiled in November 1912 before a crowd of thousands, and followed by a dinner for all the county's surviving veterans sponsored by the United Daughters of the Confederacy, the monument was intended as an enduring testament to local reverence for the Confederate cause. To fund the monument, the local chapters of the UDC and the Children of the Confederacy had worked painstakingly to raise, literally penny by penny, the $3,000 cost of the statue. As in Shelby, the monument was erected in front of the newly constructed courthouse, the most conspicuous and prestigious public space in the community.