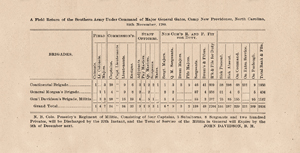 N. B. Colo. Peaseley's Regiment of Militia, Consisting of four Captains, 5 Subalterns, 8 Sergeants and two hundred Privates, will be Discharged by the 27th Instant, and the Term of Service of the Militia in General will Expire by the 5th of December next.