The War;
"Stonewall" Jackson, His Campaigns, and Battles,
the Regiment as I Saw Them
Electronic Edition.

The electronic edition is a part of the UNC-CH digitization project, Documenting the American South, Beginnings to 1920.
Any hyphens occurring in line breaks have been removed, and the trailing part of a word has been joined to the preceding line.
All double right and left quotation marks are encoded as " and " respectively.
Indentation in lines has not been preserved.
Spell-check and verification made against printed text using Author/Editor (SoftQuad) and Microsoft Word spell checkers. 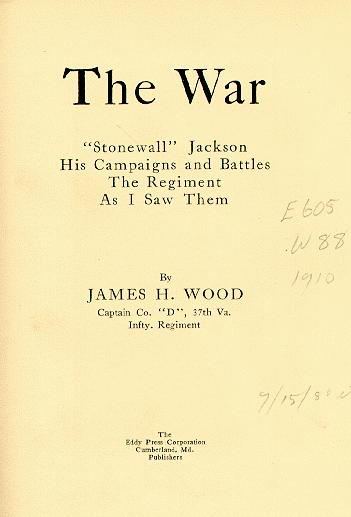 These brief memoirs of the War between the States have been written with care. More elaborate detail might have been employed but habits of a professional life have led to terseness of expression, hence the story unembellished is given, based on personal recollections aided by facts from others and such records as I have been able to reach, including Strickler's Statistics of dates of battles.

No effort has been made to do more than to give a brief account of the events seen and known directly or from sources above mentioned. This was undertaken for the purpose of leaving to comrades who still live, to the families of those who are dead, to

our own families and to posterity some record, from our view-point, of the most stirring events and enactments of our lives.

To the extent of my rank I was a participant in the scenes described - except two battles - from which disability from wounds prevented. "The Regiment" creditably participated in all.

The performance of this work though unavoidably deferred, is a duty I have long since felt incumbent upon myself as well as others who can and care to do so, to give to our country the benefit of our testimony as we saw it, of the achievements, sufferings and sacrifices through which our comrades and country passed in those eventful years before the same shall fade from our memory. Our ranks are rapidly thinning and soon there will be none left to tell the tale, hence the importance of the testimony of actors who yet live. From their direct testimony truth can be reached by the future historian. It is becoming in

us and we do revere the memory of our dead comrades, thousands of whom sleep in unknown graves, and their achievements and devotion to the cause they believed to be just have almost been forgotten. Yet while the questions involved in the War were forever settled and so accepted in good faith by the people of the South, it is the duty of the survivors to preserve from oblivion the names and deeds of their dead comrades. To this end this narrative, for whatever it is worth, has been written.